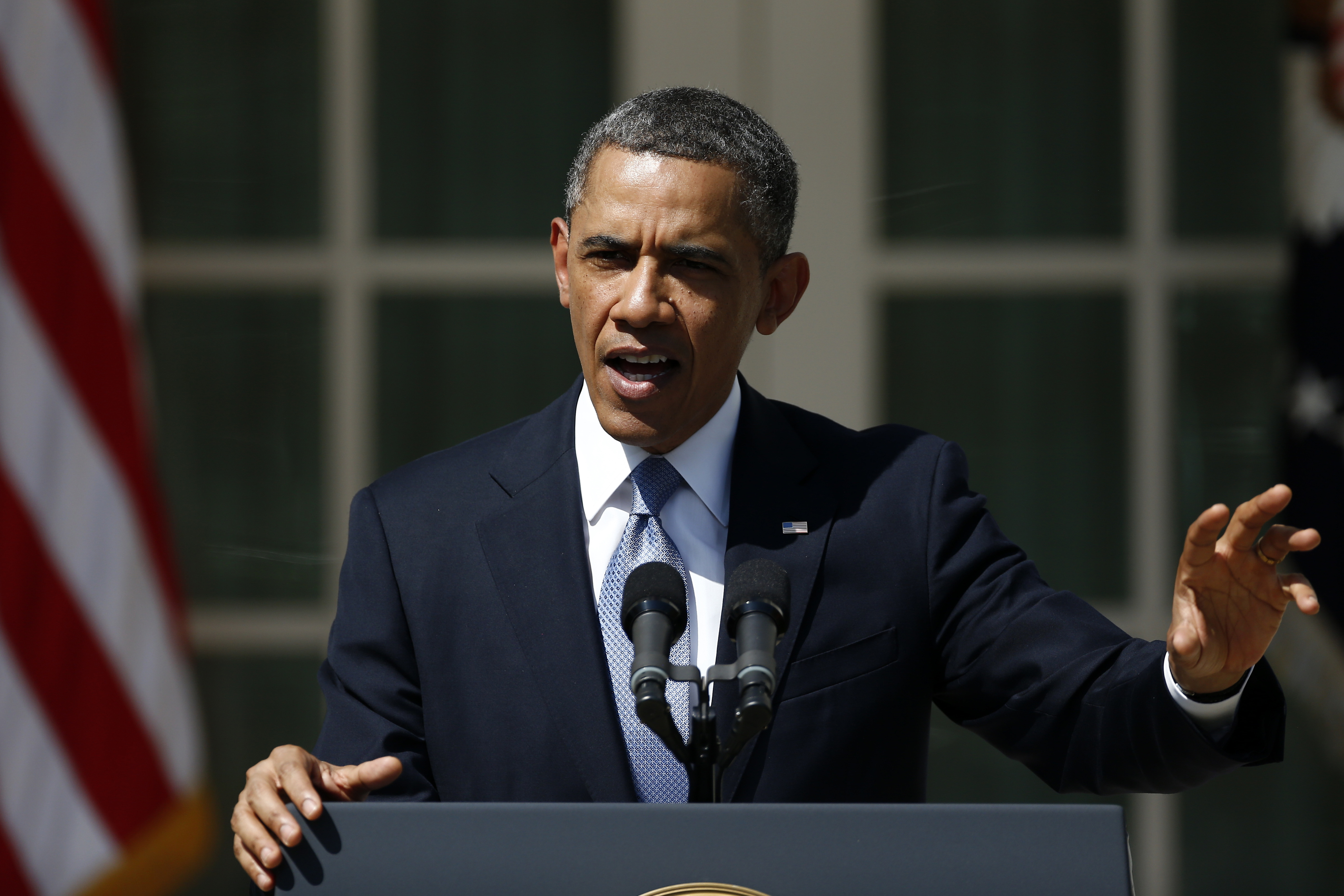 While President Obama invites Republicans to his dinner table, his liberal allies are at the gates.

On Wednesday night, President Obama dined with GOP senators at the White House. It's the second act in a dinner theater that started with a meal with another group of Republican senators at the Jefferson Hotel a month ago. Obama also made public peace offerings Wednesday to those Republicans: cuts to Social Security and Medicare in his budget that he hopes will entice conservatives to a grand budget bargain. Those measures enraged his liberal allies so much that they marched on the White House gates Tuesday to deliver 2 million petitions calling on him not to make those cuts.

If only the protesters could have waited and showed up for Wednesday night's dinner. Obama's charm offensive grand bargain strategy requires angry members of his base.

"I'm doing something hard with my base," he could say, pulling back the White House drapery to show his guests the angry liberal mob, "and so you need to give in on tax revenue, even if it angers your base." So, for the moment, the louder the shouting from the president's allies, the better.

But with each decibel, Obama is going to have to clear another minute on his calendar for future dinners with Democrats. If he wants to reach the grand bargain he dreams about, he's going to need those Democrats in the end.

The Obama strategy relies on theater. There is nothing substantively new about Obama's budget plan. He has offered versions of the same plan privately to Republican leaders, but now he's trying to go around those leaders.

One requirement for building trust with Republican senators is putting these offers on paper. This is meant to show individual senators that he is making good on the promises he has made in private conversations, but it also offers them the cover they need with their constituents. If senators are going to flirt with tax increases, they have to show their voters that they purchased something in return. Now they can point to the president's public effort on entitlements. But wait, how do we know that Obama is really making a sacrifice? Just look at how upset his supporters are.

Indeed, they are upset. The phones are melting at the Democratic National Committee with angry Democrats registering their complaints about the president's proposals. "'Chained' CPI: Two Million Times 'No!' " said the AFL-CIO. Former Labor Secretary Robert Reich took to the whiteboard, and Moveon.org launched a petition drive.

On the most contentious provision - chained consumer price index - Democrats have policy, political, and tactical arguments against it. As a policy matter, they argue that the theory behind shrinking the inflation adjustment doesn't apply to older voters. The theory is that prices aren't increasing as fast as the existing CPI suggests because people substitute one product for another when prices change. Older voters, who spend their money on health care and housing, can't substitute one cheaper good for another as easily. It also bumps the working poor off government assistance programs faster because tax brackets, which are also adjusted using the CPI, wouldn't rise as fast.

Politically, Democratic strategists say it's dumb to infuriate your base in a non-presidential election year when turning out your base is more important than ever. (On the other hand, said one strategist, railing against the president may help some Democrats raise money.)

Finally, as a negotiating strategy, the president's allies think he has given away entitlement reforms too early in the process. Republicans will move the goal posts, asking for even more, or asking that the president simply make the CPI fix and not require any tax revenue in return. Obama has said it's a package deal, but his congressional allies argue that if he started here on entitlement cuts, he's going to have to go even further for a final compromise.

Underlying all of this is the fear that the president is only interested in his own political legacy. Though Republicans worry that Obama's entire outreach strategy is a trick to make them look bad in the 2014 election, a number of Democrats think he would sell out his principles to cement a legacy-enhancing grand bargain and leave them to fend for themselves.

There are reasons the president's allies shouldn't be so worried. The president can only go so far. If his grand bargain dream comes true and enough Republicans support a deal to get it through the Senate, Speaker John Boehner would probably have to allow a vote in the House. The more Democrats Obama loses, the more Republicans he'll need to pass the bill. If that comes to pass, he'll have to give up even more (and perhaps too much to get those Republican votes). Alternatively, he'll have to suck up to Democrats the way he is Republicans right now in the hopes of charming enough of them back into line. How about dinner, breakfast, and a fundraising trip to my state?

The president's supporters have also made a political case to nervous liberals. If the grand bargain gambit fails, Obama will be able to campaign against Republicans as being unreasonable. He took a risk by offering cuts to entitlements, angered his party, and Republicans still wouldn't budge. This is another way in which those protests help the larger cause. Later, if the big deal fails, the size of the protests will remind people how much more willing the president was to take a risk for an agreement than Republicans were. Chained CPI will not have passed, and Democrats will be in a stronger position politically.

On the other hand, if by offering chained CPI, Obama starts a process that results in a grand bargain, Democrats will all benefit from the general political goodwill that will come to the president and his party. That's a tougher sell. He may want to schedule a dinner for Democrats now.