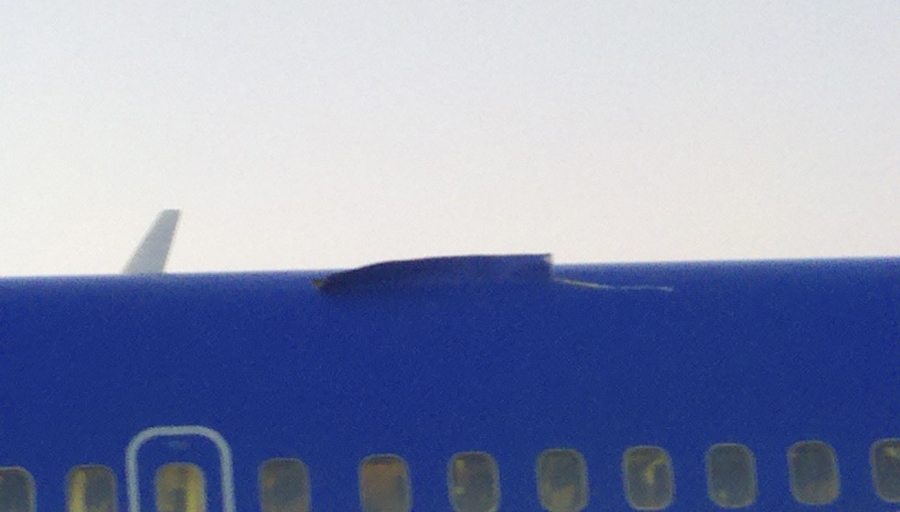 YUMA, Ariz. - Federal records show cracks were found and repaired a year ago in the frame of the Southwest Airlines Boeing 737-300 that made an emergency landing at an Arizona military base after a hole was torn from the passenger cabin.

No one was seriously injured Friday as the aircraft carrying 118 people rapidly lost cabin pressure and made a harrowing but controlled descent from 34,500 feet, landing safely near Yuma, Ariz., 150 miles southwest of Phoenix.

But passengers recalled tense minutes after a hole ruptured overhead with a blast and they fumbled frantically for oxygen masks as the plane descended.

On Sunday, federal investigators examining the damaged plane in Yuma said the entire length of a 5-foot-long tear in the skin of the aircraft shows evidence of pre-existing fatigue cracking.

National Transportation Safety Board member Robert Sumwalt said that the rip was a foot wide, and that it started along a lap joint where two sections of the 737's skin are riveted together.

Southwest mechanics will cut the entire ripped section out of the plane, and it will be sent to Washington D.C., for analysis.

An Associated Press review of Federal Aviation Administration records of maintenance problems for the 15-year-old plane showed that in March 2010 at least eight instances were found of cracking in the aircraft frame, which is part of the fuselage, and another half-dozen instances of cracked stringer clips, which help hold the plane's skin on. The records showed that those problems were  repaired.

It's not uncommon for fuselage cracks to be found during inspections of planes that age, especially during scheduled heavy maintenance checks in which they are taken apart so that inspectors can see into areas not normally visible.

The National Transportation Safety Board worked to determine what caused part of the fuselage to rupture. NTSB member Robert Sumwalt said investigators will study the cut-out fuselage piece for fracture patterns and examine the plane's black box and flight recorders.

Southwest officials said the Arizona plane had undergone all inspections required by the FAA. They said the plane was given a routine inspection Tuesday and underwent its last so-called heavy check, a more costly and extensive overhaul, in March 2010.

Southwest operates about 170 of the 737-300s in its fleet of about 540 planes, but it replaced the aluminum skin on many of the 300s in recent years, Rutherford said. The planes that were grounded Saturday have not had their skin replaced, she said.

"Obviously we're dealing with a skin issue, and we believe that these 80 airplanes are covered by a set of (federal safety rules) that make them candidates to do this additional inspection that Boeing is devising for us," Rutherford said.

Julie O'Donnell, an aviation safety spokeswoman for Seattle-based Boeing Commercial Airplanes, confirmed "a hole in the fuselage and a depressurization event" in the latest incident but declined to speculate on what caused it.

A total of 288 Boeing 737-300s currently operate in the U.S. fleet, and 931 operate worldwide, according to the Federal Aviation Administration. "The FAA is working closely with the NTSB, Southwest Airlines and Boeing to determine what actions may be necessary," the FAA said Saturday.

The 737-300 is the oldest plane in Southwest's fleet, and the Dallas-based company is retiring 300s as it takes deliveries of new models. But the process of replacing all the 300s could take years.

A similar incident happened in July 2009 when a football-sized hole opened up in-flight in the fuselage of another of Southwest's Boeing 737s, depressurizing the cabin. The plane made an emergency landing in Charleston, W.Va. It was later determined that the hole was caused by metal fatigue.

In response to that incident, Southwest changed its maintenance plan to include additional inspections, which FAA reviewed and accepted, said John Goglia, a former NTSB member and an expert on airline maintenance. The details of the plan are considered proprietary and aren't made public, he said.

Four months before that emergency landing, Southwest had agreed to pay $7.5 million to settle charges that it operated planes that had missed required safety inspections for cracks in the fuselage.

The airline inspected nearly 200 of its planes back then, found no cracks and put them back in the sky.

Friday afternoon, Flight 812 was only a few minutes into its trip from Phoenix to Sacramento, Calif., and flight attendants were taking drink orders when the explosion rocked the cabin.

Then she prayed. And, instinctively, reached out to the stranger seated next to her in Row 8 as the pilot of the damaged aircraft began a rapid descent from about 34,400 feet in the sky.

"I don't know this dude, but I was like, 'I'm going to just hold your hand,"' Redden, a 28-year-old doctoral student at Arizona State University, recalled Saturday, a day after her Phoenix-to-Sacramento flight was forced into an emergency landing at a military base in Yuma, Ariz., with a hole a few feet long in the roof of the passenger cabin.

Seated one row from the mid-cabin rupture, Don Nelson said it took about four noisy minutes for the plane to dip to less than 10,000 feet. "You could tell there was an oxygen deficiency," he said.

"People were dropping," said Christine Ziegler, a 44-year-old project manager from Sacramento who watched as a flight attendant and a passenger nearby fainted.

At an altitude above 34,000 feet, the Southwest pilots would have had only 10 to 20 seconds of "useful consciousness" to get their oxygen masks on or pass out, said John Gadzinski, an airline pilot and aviation safety consultant.

The depressurization wouldn't have affected the pilots' ability to control the plane as long as they had their oxygen masks on, said Gadzinski, president of Four Winds Consulting in Virginia Beach, Va.

"The fact that you have a breach hole doesn't affect the aerodynamics of the plane. The plane still flies exactly the same," he said.

"The higher you are the less useful consciousness time you have," said Gadzinski. "It's a credit to the pilots that they responded so quickly."

The relieved passengers obviously thought so. When the pilot emerged after the landing, they "clapped and cheered," Redden said.

"If overhead bins weren't in the way, I'm pretty sure we would've given him a standing ovation," she said.