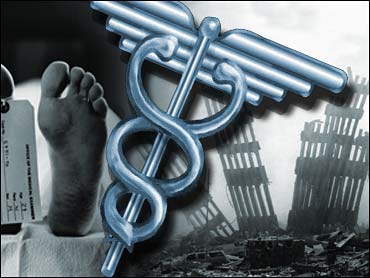 The medical examiner's office has ended its effort to identify the remains of those killed at the World Trade Center site on Sept. 11, 2001, leaving more than a thousand victims unidentified.

The forensic effort failed to identify more than 1,100 victims, or almost half of the 2,749 who died there, according to the Daily News.

Since the attacks more than three years ago, the medical examiner's office identified nearly 1,600 victims, although progress had slowed considerably in recent months. Since September, only eight victims have been identified.

The city has about 10,000 unidentified bone and tissue fragments that cannot be matched to the list of the dead.

The medical examiner's office will contact all victims' families who asked to be notified when the forensic effort ended.