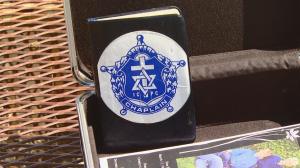 In 2001 a chaplain gave the Bible to a Sept. 11 first responder as a way to help him cope with the devastation. That Bible is now taken to other communities dealing with tragedies.

A charity group held a prayer vigil Saturday in Aurora and is letting local churches use the Bible to spread a message of hope.

"It has such power, I believe, because it has been to so many different places and has comforted so many people, that when you get that energy together it's just unbelievable; it does great things," Sept. 11 first responder Brittany Wood said.

The group is also sharing the Bible with the family of Ashley Moser. She was paralyzed in the shooting and her little daughter was killed.

On Saturday some family members visited the memorial for the first time and thanked the group for bringing the Bible to Colorado.

"I think it's a symbol in healing in that something so tragic could turn into something beautiful and good; and support in not only the community, but the country and the world," said Heather Dearman, Ashley Moser's cousin.

The Moser family says Ashley has a long road ahead of her. They have set up a fund to help with her medical expenses.