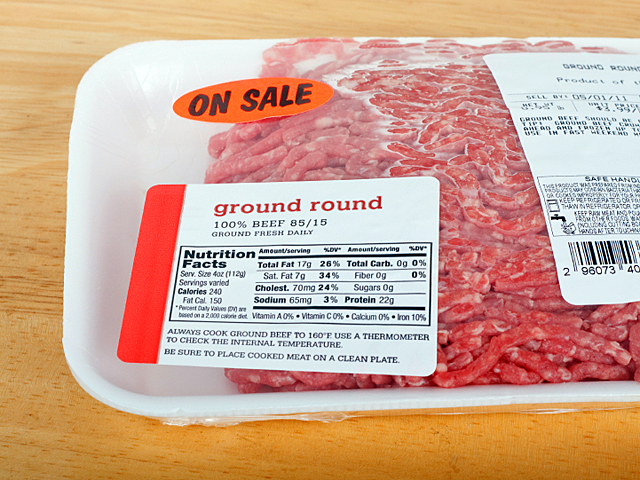 WASHINGTONGround beef and ground chicken cause more hospitalizations than other meats in the American food supply, a new report finds.

An analysis by the consumer advocacy group the Center for Science in Public Interest that looked at more than 33,000 cases of foodborne illness also showed that

The nonprofit used U.S. government data on 1,700 outbreaks over 12 years to analyze salmonella, E. coli, listeria and other pathogens that were definitively linked to a certain meat.

"Outbreaks from ground beef and chicken are reported frequently, and all too often cause debilitating illnesses--illnesses that lead to hospitalization," CSPI food safety director Caroline Smith DeWaal, said in a written statement.

To calculate which meats were riskiest, CSPI ranked the foods in which contamination was most likely to cause hospitalizations.

For example, about one quarter of people sickened with the salmonella bacteria are hospitalized, according to DeWaal. Most people recover without treatment after four to seven days.

Some meats in the CSPI's study may have caused more foodborne illnesses than ground beef and chicken, but were less likely to cause severe illness.

After ground beef and chicken, CSPI categorized turkey and steak and other forms of beef as "high risk" and deli meat, pork, roast beef and barbequed meats as "medium risk."

Salmonella and E. coli, pathogens that contaminate meat and poultry during slaughter and processing, accounted for about one third of the total illnesses surveyed. Clostridium perfringens, a lesser-known pathogen that usually grows after processing when foods are left at improper temperatures for too long by consumers or food establishments, accounted for another third.

While a large number of chicken illnesses were due to clostridium perfringens, chicken led to many hospitalizations partly because of the high incidence of salmonella in chicken that isn't properly cooked.

Most of the ground beef illnesses were from E. coli, which is found in the intestinal tracts of cattle and can transfer to the carcass if the meat isn't handled properly during slaughter. Ground beef can be riskier than steak and other beef products because pathogens are spread during the grinding process.

According to the report, listeria, salmonella and E. coli required the most hospitalizations.

The group noted that the data is incomplete because so many foodborne illnesses are not reported or tracked. The CDC estimates that as many as 48 million Americans get sick from food poisoning each year.

The full report can be accessed on the CSPI's website.

To reduce foodborne illnesses from meat, CSPI recommends what they call "defensive eating" - assuming that meat can be unsafe. Safe handling includes not letting meat juices drip onto other food or counters, cleaning cutting boards and plates that have held raw meat, wearing gloves when preparing meat and washing hands often. Cooks should also make sure meat is heated to the proper temperature before eating it.

Last week, a CDC study reported increases in food poisoning rates linked to Campylobacter, a bacteria found in raw milk and poultry. The agency also reported upticks in rates of Vibrio, a bacteria associated with shellfish.

The CDC has more safety tips for protecting yourself and your family from foodborne illness.