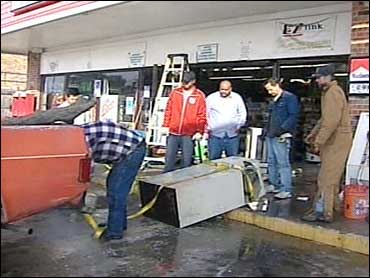 His struggling team is in last place in the AL West, a division it won a year ago, and is 6-16 in June. Ken Griffey Jr. isn't giving up, though.

"It ain't over with," Griffey said Tuesday night after hitting his AL-leading 29th homer and doubling home another run to help the Seattle Mariners beat the San Diego Padres 5-3.

"It's a long season. You play 162 games. We could turn it around. Teams go through basically what we're going through. We could be there at the end."

The Mariners, 13 games under .500, started the day 15 games behind division-leading Anaheim, their biggest deficit since they finished the 1992 season 32 games behind Oakland.

Against NL West-leading San Diego, however, the poor-fielding Mariners didn't commit an error and got their 11th save in 25 opportunities from their bullpen.

"We just got some breaks today," Griffey said. "That's what baseball's about, getting some breaks. We haven't had any for the last month. We've just got to go out and play and be positive."

Jamie Moyer (5-6) pitched eight shutout innings before weakening in the ninth for Seattle.

Moyer took a 5-0 lead into the ninth before getting into trouble. After Tony Gwynn led off with a single, Greg Vaughn doubled him to third and then both scored on Ken Caminiti's double.

Seattle manager Lou Piniella was smiling when he visited the mound before Caminiti came up and was greeted by boos from the crowd of 30,961. As Piniella walked off the field without taking Moyer out, the crowd cheered and he doffed his hat.

"I was just having some fun," Piniella said.

Heathcliff Slocumb relieved and gave up an RBI double to Wally Joyner that made it 5-3. Slocumb retired the next two batters before giving up a single to Carlos Hernandez that put runners on first and third. He then struck out pinch-hitter Mark Sweeney for his second save.

Moyer gave up eight hits with three strikeouts and no walks.

"When you get good pitching and you play good defense, that's the right recipe," Piniella said. "When you do that, you've got a very good chance of winning."

If Moyer was nervous after leaving the game, he didn't say.

"It was fine. We got three outs. We did the job. That's the way it's supposed to be, right?" Moyer said of the ninth.

Griffey gave the Mariners a 1-0 lead in the first inning with a 394-foot shot to right field. His RBI double in the seventh made the score 5-0.

"I'm tired of seeing him," Joey Hamilton (5-8) said of Griffey, who is 7-for-11 with three homers and two doubles against Hamilton. "Griffey is probably going to be upset that he won't get to face me when he comes to town."

The Mariners will play in San Diego on Wednesday nd Thursday.

The Padres, who started the day tied with Atlanta for the best record in the National League at 50-26, lost for only the second time in 15 games.

"He can do a lot of things," Bochy said. "He's a great defensive player, he plays the game right. He's an outstanding hitter. He's going to go down as one of the best all-around shortstops in the game."

Vaughn went 3-for-4 for the Padres.

Notes: Griffey's homer was the 323rd of his career, which is 65th on the all-time list. Gary Carter is next with 324 homers. ... Griffey has homered in nine straight series and 12 of the last 13. He has 22 RBIs in 23 games. ... ... Seattle leadoff hitter Rich Amaral scored three runs and stole two bases. ... Rob Ducey of the Mariners was hit twice in the fourth inning in the right knee by Hamilton's pitch, then in the back by catcher Hernandez's throw while getting back to third later in the inning. ... Center fielder Steve Finley committed the Padres' first error in nine games and 84 2-3 innings in the fourth when he bobbled a ball that allowed Ducey to advance to third. ... The Padres are 15-6 in June, with three of their losses this month coming against AL teams.