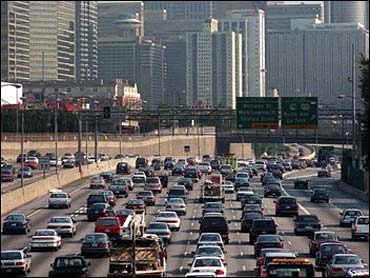 If getting stuck in traffic makes you want to roll down your car window and scream, look no further than another of those studies to find the bad news: Gridlock is getting worse.

Overall in 2003, there were 3.7 billion hours of travel delay and 2.3 billion gallons of wasted fuel for a total cost of more than $63 billion.

Yearly rush-hour delays for each motorist declined from 98 hours in 2002 to 93 hours one year later, but were still longer than any other city in the country. San Francisco had the nation's second-longest delays, declining from 75 hours in 2002 to 72 hours in 2003.

Joy Stanton told Bowen while fueling up that her driving woes extend far beyond just sitting in traffic: "Traffic is a nightmare; gas is out of control and the violence is out of control, too."

Even driving in paradise is no picnic. Honolulu became the 51st city in which rush-hour traffic delayed the average motorist at least 20 hours a year. The Hawaiian capital joins such congested areas as Washington, Atlanta, Boston, Chicago — and Virginia Beach, Va., Omaha, Neb., and Colorado Springs, Colo.

The report was released Monday, the same day the Senate resumes debate on a bill that would spend $284 billion on highways over the next six years.

But that's not enough money to solve traffic problems, according to highway and transit advocates.

The American Association of State Highway and Transportation Officials estimated it would take as much as $400 billion in federal spending over the next six years to solve traffic problems, based on a 2002 study.

Roads aren't being built fast enough to carry all the people who now drive on them, according to the Transportation Development Foundation, a group that advocates transportation construction.

The number of vehicle miles traveled has increased 74 percent since 1982, but road lane mileage only increased 6 percent, the foundation said.

Tim Lomax, a co-author of the Urban Mobility Report, said the soft economy and slow job growth in 2003 meant that congestion got worse more slowly than it would have during better times.

"The upside of a slowdown in the economy is the congestion didn't get worse very quickly," Lomax said.

Lomax said that declines in rush-hour delays in some cities didn't mean congestion improved throughout each area. It probably just spread out to the suburbs.

"In most of those places, delay actually went up, it just didn't go up as fast as the number of people moving in went up," Lomax said.

Only job loss or major commitments to expand capacity will decrease congestion dramatically, he said.

Take fast-growing Austin, Texas, for example. In 1982, the average peak-hour traveler was delayed by 11 hours a year. That delay increased to 51 hours in 2003, the report said.

"Austin didn't add transportation capacity in the '80s or '90s," Lomax said. "The 'If you don't build it, they won't come' philosophy didn't work."

Congestion can also be reduced by managing traffic better. The report said such techniques as coordinating traffic signals, smoothing traffic flow on major roads and creating teams to respond quickly to accidents reduced delay by 336 million hours in 2003.

Robert Dunphy, senior resident fellow for transportation at the Urban Land Institute, said that half of all traffic delays are caused by car crashes.

"There are huge benefits to getting in there and clearing accidents quickly," Dunphy said.

But Bowen reports that gridlock is on the move.

It is expanding to the suburbs where people have moved to get away from big-city problems. But where people go, the traffic goes, too.