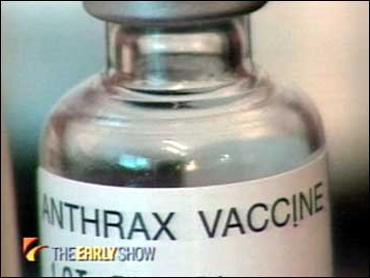 Enough new-generation anthrax vaccine to dose 25 million people: That's first on the government's shopping list under a massive new program to develop and stockpile antidotes to biological and chemical weapons.

Called Project BioShield, the $5.6 billion program passed the House on a 414-2 vote Wednesday. The Senate passed it in May and President Bush's signature is guaranteed.

States already are beginning to receive long-awaited federal shipments of antidotes against chemical weapons, under a program that aims to have stocks in every state within two years. Among the first recipients of the "chem-packs" are facilities in Boston and New York, sites of the political conventions this summer.

Federal health officials have more on their wish-list: antidotes for botulism and anthrax, a safer smallpox vaccine, and a long-awaited children's version of an anti-radiation pill.

"The passage of Project Bioshield is a watershed in our mission to defend America against bioterrorism, establishing a first line of defense against biological weapons," said Rep. Christopher Cox, R-Calif., chairman of the House Homeland Security Committee.

President Bush said in a statement that he looked forward to signing the bill, which would help protect the homeland and "break new ground in the search for treatments and cures while strengthening our overall biotechnology infrastructure."

Project BioShield doesn't mean the government will make these products. Instead, it offers pharmaceutical companies a guaranteed buyer — an incentive the industry has long sought before spending millions in research to produce terrorism countermeasures. Unless the federal government buys these products, proponents argue, the market will be too small to justify the research costs.

The legislation also would accelerate the approval process for the new products and allow more widespread distribution of experimental medications during a terrorist attack. If the private sector leaves a gap, the government would be allowed to operate emergency programs to research and produce vaccines.

Federal health officials would be able to stockpile whatever drugs are deemed necessary, although products are still undergoing research and testing, and purchase is contingent upon data showing they'll work.

The government hopes to sign contracts by late August to produce a stockpile of 75 million doses of a new-generation anthrax vaccine, said Dr. Philip Russell of the Health and Human Services Department.

At three shots apiece — half of today's requirement — that would cover 25 million people. HHS wants enough vaccine to inoculate emergency-response workers, if they want it, and be able to deal with a major anthrax attack on a city.

HHS also wants to bolster the very small supply of botulinum antitoxin. The botulinum toxin is the most poisonous found naturally on Earth, and experts fear a deliberate contamination of the food supply. The government is working with Canada's Cangene to produce enough antitoxin, from the blood of vaccinated horses, to treat tens of thousands of people, Russell said.

"We believe adding an antitoxin product will greatly improve the outcome," Russell said, but research on several candidates is in very early stages.

BioShield also should fund purchase of potassium iodide for children, because the pills that protect against thyroid cancer from radiation exposure now are formulated for adults. The government is also seeking new-generation smallpox vaccines that are safer than today's version, which can cause severe, even life-threatening side effects in some people.

Later, the government hopes to find antidotes or vaccines for plague, Ebola, Rift Valley fever and chemical and radiological attack.

Three Senate office buildings were closed for up to a week this February after the biological toxin ricin was found in the office of Majority Leader Bill Frist, R-Tenn.