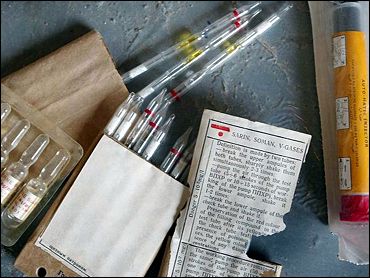 States are beginning to receive long-awaited federal shipments of antidotes against chemical weapons, under a program that aims to have stocks in every state within two years.

The Centers for Disease Control and Prevention began quietly shipping the so-called chem-packs four months ago. New York City and Boston, sites of the upcoming national political conventions, were among the early recipients.

The program provides "a quick way for hospitals to know they'll have the antidotes they need," Donna Knutson, CDC's deputy director of terrorism preparedness, told The Associated Press on Tuesday.

It was prompted in part because there has been "an uneven level of protection across the country," added Steve Adams, deputy director of the Strategic National Stockpile Program.

Much of the nation's ongoing efforts to prepare for terrorism have focused on biological attacks. For example, the National Pharmaceutical Stockpile contains tons of drugs, vaccines and other medical supplies in storage around the country, so that any U.S. city can receive a needed shipment within 12 hours.

That may be enough time to react to an incubating infection like anthrax, but the ability to survive a chemical attack depends on immediate decontamination and rapid administration of appropriate antidotes.

Yet those antidotes are expensive and have fairly short shelf-lives, making them hard for many states to keep stocked.

Enter the chem-packs, which CDC began shipping four months ago.

The packs come with a variety of chemical antidotes, such as atropine to fight nerve agents. Some are in autoinjectors for attack-site use; others are packaged for emergency-room use.

For security reasons, CDC officials wouldn't say which states had received chem-packs so far, naming only New York and Boston.

New York received its first packs under a pilot program a year ago, said Jared Bernstein of the city's Office of Emergency Management. Now, looking toward next month's Republican convention, the city has received updated supplies.

The initial pilot program stalled when it was shuffled among federal agencies, said former Health and Human Services public health preparedness chief Jerry Hauer. "It's about time" the program was restarted, he said.

The number distributed depends on each state's population, and state health departments decide which hospitals will store the chem-packs. But the hospitals decide when it's time to break one out and use the contents.

"When minutes matter, if they need it to save lives, they have the authority to break the seals and go do the right thing," Adams said.

The CDC invested $56 million last year in creating the chem-packs, and has budgeted about $34 million this year as the distribution begins, officials said.

"It's the next logical step," said Dr. Georges Benjamin of the American Public Health Association, which long urged the federal government to prepare for chemical attacks.

The chem-packs will ensure "you have a ready cache of supplies if you have a large number of chemical victims," he said. Plus, "the right doses will be there, and hopefully you don't have to worry about people making up medications and overdosing or underdosing patients."

Nor are the packs reserved for terrorist attacks only. The same antidotes would be useful in a major factory accident or train wreck that spills hazardous chemicals, he noted.

The specially sealed packs come with environmental sensors to ensure the materials are stored properly. Until the seal is broken, the chem-pack contents qualify for a federal program that extends their expiration dates for several years, potentially saving thousands of taxpayer dollars, Adams said.

"That's why it makes sense for us to be in the business," instead of just funding states to buy their own drugs, he said. "That's the benefit the locals see — it's not a one-time deal."