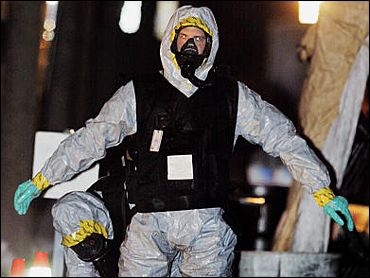 Despite the ongoing mystery into why someone sent two ominous letters with the deadly poison ricin to Capitol Hill, the Russell Senate Office Building was to reopen Thursday. The Hart building was scheduled to open Friday, and Dirksen on Monday.

However, investigators say they have found nothing to explain how the potentially deadly powder wound up in the offices of the Senate Majority Leader.

"There has been no smoking letter information that helps tie this thing together," said Capitol Police Chief Terrance Gainer.

The investigation is focusing on a mysterious "Fallen Angel" who threatens to use ricin as a weapon unless new trucking regulations are rolled back.

Three senior federal law enforcement officials, speaking on condition of anonymity Wednesday, said the FBI and Capitol Police Department were investigating the possibility that the same person or persons who made those earlier threats sent ricin-laced mail to Senate Majority Leader Bill Frist.

The typewritten letters, addressed to the White House and Transportation Department and signed by "Fallen Angel," warned that more ricin would be used unless some trucking regulations that went into effect Jan. 4 were scrapped.

Hazardous materials teams from the FBI and Capitol police continued the search Wednesday night for a letter or parcel that might have carried the ricin powder found Monday in a mail-sorting room in Frist's personal office suite. No such parcel was immediately found.

Gainer said investigators have found "no obvious direct connection" between the Frist case and the letters signed by "Fallen Angel." Those letters were discovered in mail facilities that serve the Greenville-Spartanburg International Airport in South Carolina and the White House.

They were found Oct. 15 and Nov. 6, respectively, but the existence of the White House letter was not disclosed by the Bush administration until Tuesday.

The letters, described as nearly identical, claimed that the author owned a tanker truck fleet company and demanded that rules governing the numbers of hours truckers can drive remain unchanged, according to the FBI.

The FBI said the South Carolina letter was in an envelope with a typewritten warning "Caution RICIN POISON." The letter included claims that the author could make much more ricin and would "start dumping" if the new regulations weren't abolished. There was no delivery address and no postmark.

No one has fallen ill in any of the incidents.

There is no known antidote for ricin, a strong toxin which is relatively easy to make from castor beans. Ricin is considered a less effective weapon for causing mass casualties than anthrax, which was mailed to Senate offices in late 2001, because it is more difficult to make airborne and requires inhalation of large quantities to be fatal.

The FBI focused on ricin in its weekly intelligence bulletin to 18,000 state and local law enforcement agencies. The confidential bulletin, obtained by The Associated Press, said no threat of any kind had been received in the Frist case. It concentrated mostly on the dangers of ricin and how police should respond to potential contamination.

The trucking industry has been working with the FBI and Transportation Department inspector general's office on the investigation. The American Trucking Association has sent bulletins to its members urging them to be aware of people "displaying aggressive behavior" or engaging in suspicious activity.

One association bulletin asked that members "be alert for either a potential disgruntled trucking company, trucking company employee or person purporting to be from the trucking industry" who has made threats in the past against government agencies.

The regulations at the heart of the "Fallen Angel" letters were four years in the making and drew some 53,000 comments when first proposed, trucking association spokesman Mike Russell said. Many truckers and companies worried about lost pay and productivity because of stricter rest requirements.

"It was controversial," Russell said.

While the South Carolina letter's existence was made public shortly after it was found, the Bush administration delayed acknowledgment of the White House letter by nearly three months. It was intercepted Nov. 6 by the Secret Service at an offsite mail facility.

Secret Service spokeswoman Ann Roman said the FBI and other agencies were notified after the letter tested probable for ricin on Nov. 12. White House spokesman Scott McClellan said Homeland Security officials held a Nov. 13 conference call with the FBI, Centers for Disease Control and Prevention, Postal Service and other agencies to discuss what to do.

Ultimately, the ricin in that letter was deemed to be of a low grade and not a threat to public health, so no announcement was made. President Bush was not immediately informed, McClellan said.

"We share information appropriately, if there is a public health risk," McClellan told reporters.

The al Qaeda terror group has threatened to use ricin, but officials have found no indication that the two "Fallen Angel" letters or the Frist incident are connected to international terrorism.

The FBI has offered a $100,000 reward for information leading to an arrest in the "Fallen Angel" case.