"Time of Your Life" was a huge hit for Green Day, whose music drives a Broadway rock show nominated for three awards at the Tonys next Sunday. Tracy Smith now with a Summer Song ...

The following is an update of a story first broadcast on May 24, 2009.


Call it punk rock for grownups. In an age where many rock bands have the lifespan of a butterfly, Green Day has gone the distance and they've done it by going their own way.

They've also created pop classics, some of which have found their way into movie and TV soundtracks, including one of the final episodes of "Seinfeld."

And now, one of the band's bestselling albums, "American Idiot," has been turned into a Broadway show of the same name, with Green Day's music performed on stage by a dynamic young cast.

So where do this rank among the million cool things they've done?

"Top," said Billie Joe Armstrong. "It's the absolute biggest thing that's ever happened to us.

"To have flesh and blood people performing our songs back at us and take it to a whole 'nother level, it's un-describable," said Mike Dirnt.

"It's not exactly 'My Fair Lady" . . . but Green Day isn't exactly your typical punk rock band.

They say the bonded over music.

"I think we ended up playing our first show together and we played I think it was the seventh grade at, like, the - like, the middle school dance or something like that," Armstrong said. "And it ended up being really fun."

The gigs got bigger, and by the early '90s the band was touring nonstop, with drummer Tre Cool's father driving the bus.

"What was it like having your chaperone dad with you on tour?" Smith asked.

"It was fine until he started like crossing the line of - of like being a father and being a bus driver. Like he would complain about dirty socks and stuff," Cool said. "It's like, 'Dude, we're a punk band. We are dirty socks.'"

By 1994 they had a new label and a new album - "Dookie" - a major milestone in a journey that would take them out of dirty socks and into the rock music stratosphere.

"'Dookie' came out and it was, like, the most dramatic thing that ever happened to us at the time, you know?" Armstrong said.

"We got a roadie," Cool said. "Everything was stepped up - you know, another notch. And then, you know, there's - we had fans." 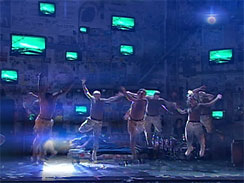 (CBS)
It was new, all right: "Dookie" went on to sell more than 10 million copies. And, almost overnight, Green Day became the band of a generation - irreverent, even obnoxious punks with the skills and the smarts to get away with it.

(Left: Cast members of "American Idiot," the Broadway musical based on the album by Green Day.)

Away from the spotlight they lead relatively quiet lives. Mike Dirnt, who at one time supported himself as a cook, is now part owner of Rudie's Can't Fail Café in Oakland, named for a song by The Clash.

"I grew up hanging out in coffee shops at one and two in the morning and I thought it'd be really cool to have a place open seven days a week where we could get a coffee or a beer and also bring a kid in and not have to wait an hour and a half for a waffle," he said.

Now, of course, getting a good table is easy. Spending time on tour away from his two children - a bit tougher.

"It could be worse," Dirnt said. "I could have to go overseas and go to war and not come back at all. And as long as you keep those things in mind you're going to wake up on the right side of the bed with a purpose."

Asked if he always had such a positive attitude, Dirnt replied, "No, it ebbs and flows. You caught me on a good morning. I've had my coffee already."

Lead singer Billie Joe Armstrong - who, like all members of Green Day, still lives in the East Bay - is also the father of two.

"I consider myself a conservative parent, believe it or not, in a lot of ways," he said. "There's different sides of everybody. I think I just worry like every other parent does. You worry about education; you worry about where they're getting their information from. You hear things you never thought you'd hear coming out of your baby's mouth. But it's a trip. It's all part of it, you know?"

"You mention education. You dropped out of high school. How do you explain that to your kid?" Smith asked. "What do you say about education?"

You know, my oldest son, I talked with him about it recently I never brought it up before. And what I told him was I'm the luckiest bastard on the planet for doing what I've been able to do. As a musician and get to the heights we've gone to or at least the level we've gone to and it's something I never take for granted and it doesn't happen to everybody and, you know, my kids like music too," Armstrong said.

But, "it's not a family business. It's not like he's going to suddenly take over at the office or something," Armstrong said. His son won't be playing tambourine onstage.

Armstrong himself took to music early, cutting his first record at age five.

"I started learning standards and stuff at a young age," he said.

"You had the sweetest little voice," said Smith of the 5-year-old Armstrong singing "Look for Love."

"How the hell did she hear the song?"

He's come a long way since "Look for Love." Armstrong has written the lyrics to a number of hit singles, including the platinum record, "Wake Me Up When September Ends."

Some believed it was a reference to the attacks on 9/11, but Armstrong says it's more personal.

"It was about my father, who died in September of 1982. And I - that was first time I ever tackled anything that had to do with my dad - my dad passing - a long time ago. And so it was kind of awkward," Armstrong said. "Actually, of all the songs I've written, I - that was the one song that - I was surprised - I surprised myself 'cause I'd never sang a song about him before or written anything about him before."

The song was on the 2004 album "American Idiot," a rallying cry against the political status-quo. Written as a cohesive rock opera, the album was a complete departure for Green Day, and a commercial and critical smash - and it's what the Broadway show is based on.

"There's a succession of albums, and then comes the - and I've heard this term over and over again - masterpiece "American Idiot," Smith said. "What do you think of that term?"

"It's not really strong enough," Armstrong joked, "in the term to describe such an opus of sorts."

But the band said it was only a prelude to "21st Century Breakdown," an even more ambitious concept album that hit number in America last year.

"It's chaos and desperation and, you know, there's an angry mob, there's a city on fire while you're making out with your girlfriend in the middle of it," Armstrong said.

Some of the album's language earned it a parental advisory sticker, and put Green Day at odds with Wal-Mart. The nation's largest retailer won't stock any CD with such a label. True to their own convictions, Green Day has refused to provide an edited version, saying there's nothing dirty about the record.

"It kind of just tackles every emotion - internally and externally, politically, personally, whatever you wanna call it," Armstrong said. "And then it tries to kind of make sense of an incredibly chaotic world and desperate world that we live in, you know, just to try to make some sense of it."

The album "American Idiot" won two Grammies and sold upwards of 12 million copies worldwide. "American Idiot," the show, gives the music an added dimension through what has been described as violent choreography.

It opened on Broadway this past April, and is nominated in three categories (including Best Musical) at next Sunday's Tony Awards.

"The reviews have been great, but your hometown paper said something that wasn't so nice," remarked Smith. "They said that 'What was once fine gouda has been prepackaged as Velveeta.'"

"I wouldn't know fine gouda if you threw it in front of me!" replied Dirnt.

In some ways, they may have built their success on being angry at the world, but the guys in Green Day seem happy with their place in it.

"This is a good journey that always starts with the music, you know? Whether it's live or just with an acoustic guitar in your room," said Dirnt. "I think at the end of the day, if you follow the music, it'll take you on a really, really great journey.