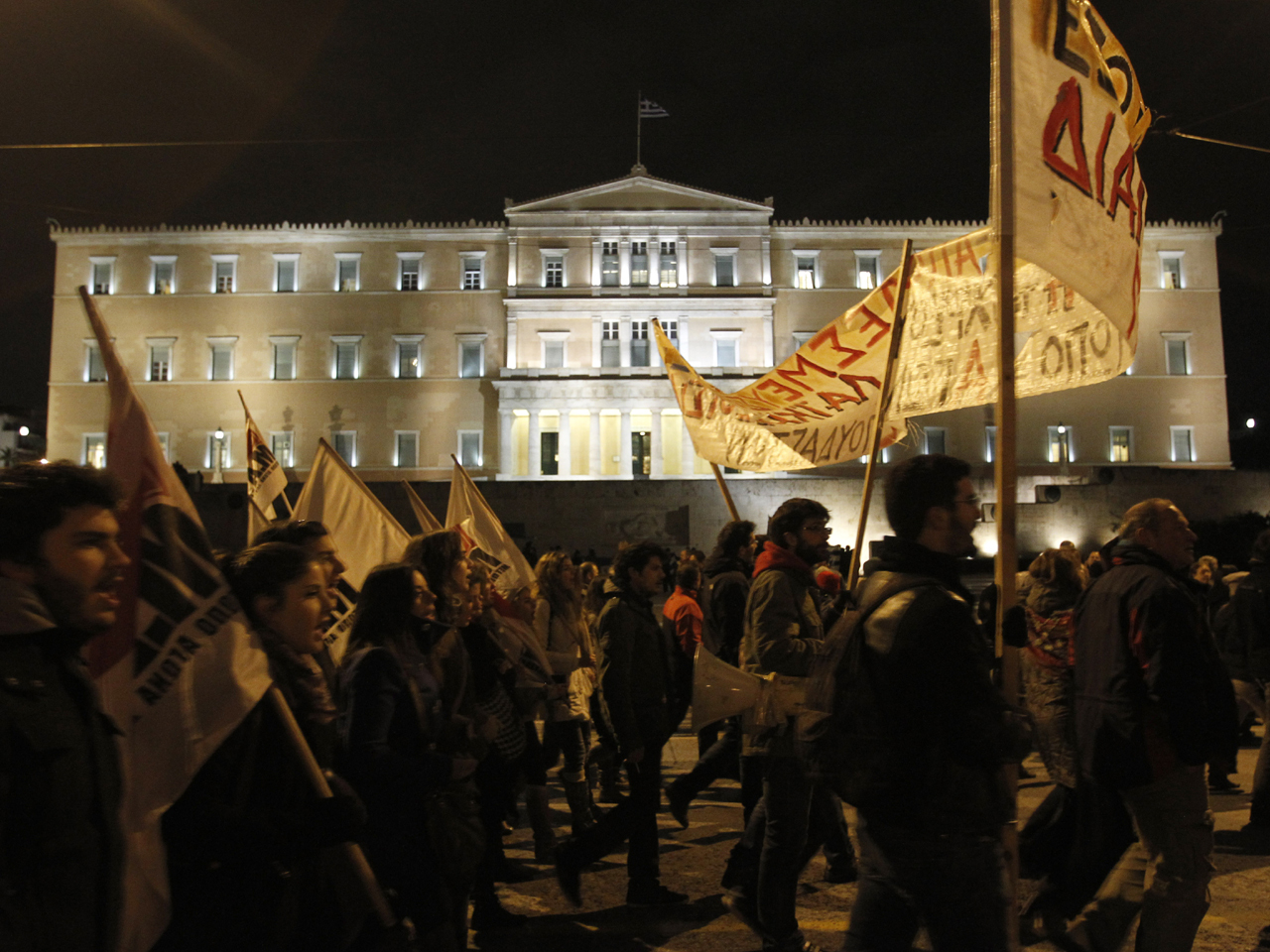 ATHENS, Greece - Thousands took to the streets of Athens as Greek unions launched a two-day general strike against planned austerity measures on Friday, a day after the country's crucial international bailout was put in limbo by its partners in the 17-nation eurozone.

Police said some 17,000 people were gathering for two separate protests leading to Syntagma Square, outside Parliament. They chanted slogans against the painful cutbacks, which include reducing the minimum wage by 22 percent and cutting one in five government jobs in a country which is in its fifth year of recession.

Bailout creditors say Greece has not yet met demands for all the austerity measures, however. Frustrated by days of dithering, they have given political leaders in Athens until the middle of next week to meet the full list of required reforms. Otherwise, the country will lose its rescue loan lifeline, go bankrupt next month and likely leave the euro.

"We are experiencing tragic moments," Deputy Prime Minister Theodoros Pangalos told Parliament Friday. "These days are the last acts of a drama that we all hope will lead to a happy conclusion with a voluntary reduction in our public debt and implementation of a framework by 2015 that will allow the economy to stabilize."

The Greek coalition government, led by Prime Minister Lucas Papademos had hoped some of the heat had been taken out of the crisis after leaders agreed Thursday to a raft of austerity measures they hoped would pave the way for the euro130 billion ($173 billion) bailout package.

However, finance ministers from the other 16 eurozone states put up a roadblock later in the day by insisting that Greece had to save an extra euro325 million ($430 million), pass the cuts through a restive parliament and guarantee in writing that they will be implemented even after planned elections in April.

A Cabinet meeting has been called for the afternoon, while the majority Socialists and the conservatives were later to hold party meetings to discuss the cutbacks.

The new hurdles Greece has to clear to avoid a default that could send shockwaves around the global economy dented sentiment in the markets Friday. Stocks were down all over Europe, with the benchmark index in Athens 1.8 percent lower in early afternoon trading.

While facing intense pressure abroad, Greece is having to deal with another strike. The country's two biggest labor unions stopped railway, ferry and public transport schedules, and hospitals worked on skeleton staff while most public services were disrupted. Unions were planning protests in Athens and other cities around midday.

But the party leaders balked at demands for more cuts to already depleted pensions, later issuing nebulous assurances that a solution had been found.

"Unfortunately, the eurogroup did not take a final, positive decision," Finance Minister Evangelos Venizelos said after Thursday's talks in Brussels. "Many countries expressed objections, based on the fact that we did not fully complete the list of additional measures required to meet our targets for 2012."

"The choice we face is one of sacrifice or even greater sacrifice — on a scale that cannot be compared," Venizelos added.

Once all the demands have been fulfilled, the eurozone will give Greece the green light to start implementing a separate bond swap deal with banks and other private investors designed to slice some euro100 billion ($132 billion) off Greece's debt load.

"I am confident that a solution will be reached next week as this is critically important for Greece and the Greek citizens first and foremost but also for the whole euro area," he said during a visit to India. "I therefore call on the responsibility and the leadership of the Greek leaders and all members of the eurozone so that we can obtain this goal that is important for the euro area and indeed for the global economy."

"It's really important that this situation comes to an end and gets wrapped up. Greece needs to do what other countries are doing, countries that have been in difficulty but are completely in line with the recovery plans," Noyer said on Europe-1 radio Friday. "Greece has to accept all of this."

But on the streets of Greece, the mood is grim, after two years of severe income losses, repeated tax hikes and retirement age increases that failed to signally improve the country's finances. Unemployment is at a record high of 21 percent — with more than a million people out of work — while the economy is in its fifth year of recession and is expected to contract up to 5 percent in 2012.

The country's politicians have taken a lot of criticism for the situation, and polls show the majority Socialists, elected in a 2009 landslide are now languishing at around 8 percent.

A Greek Socialist lawmaker resigned his seat Friday to protest the new austerity, a day after the country's deputy labour ministry stepped down from his position for the same reason. But the resignation of Pavlos Stasinos will not affect the party balance in Parliament, as he will be replaced by another Socialist deputy.

"It is unacceptable that right now our politicians' petty political and public relations maneuvering should be leading the country to bankruptcy," respected Kathimerini daily said in an editorial. "The country is tumbling towards a cliff-edge, and a tough European establishment is putting out the view that Greece cannot be saved and lacks credible politicians. Our politicians back that view with their carryings-on."

Ta Nea daily accused Greek politicians of "theatrics and shilly-shallying," and urged lawmakers to back the new measures in the Parliamentary vote, tentatively planned for Sunday.

"Nobody can happily back the painful agreement with the troika," it said in an editorial. "But neither can anyone shoulder the burden of the consequences, if the agreement is not completed."