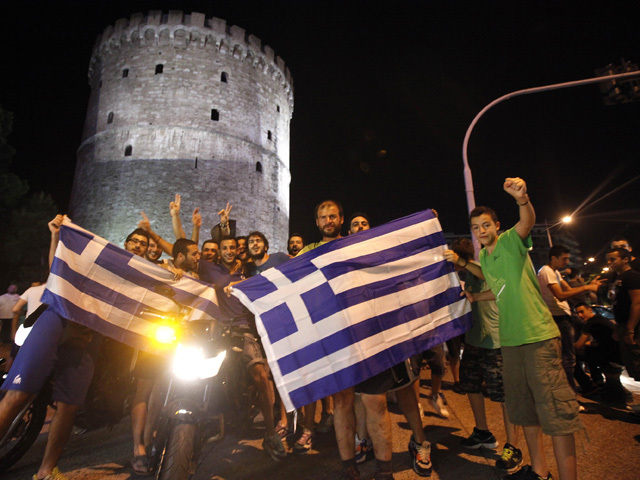 (AP) ATHENS, Greece - Amid the gloom of a political and economic crisis, Greece's gutsy 1-0 win over heavily-favored Russia to advance to the Euro 2012 quarterfinals has at last given the country's crisis-weary citizens something to cheer about.

Thousands poured into Athens' central Omonia Square on Saturday waving Greek flags, lighting green and red flares and setting off firecrackers amid the din of hundreds of honking cars and renditions of the national anthem in a spontaneous outpouring of patriotic fervor.

Clouds of acrid smoke wafted through the square as motorcyclists spun their tires. Shirtless revelers danced in the street, halting traffic, but motorists caught up in the celebratory atmosphere weren't all that bothered, blasting their horns in approval.

On the eve of pivotal elections that could decide their economic fate, the win gave ordinary Greeks a chance to exhibit a little in-your-face swagger, thumb their nose at Europe and push back at being painted as the continent's deadbeats.

The victory was all that much sweeter because it came in true underdog style, bringing back memories of Greece's improbable run eight years ago.

"The result is a message to politicians, to everyone that Greece won't die and never bows to anyone," said Chris Mbogosian, 62.

"Greeks have heart and they show it when things get tough, we pull together in times of crisis," said 29-year-old Vasilis Papaspyliotopoulos, standing amid the crowd with the Greek flag draped across his shoulders.

Revelers broke into chants of "bring on the Germans", relishing the prospect of meeting the country footing most of the bill for their multi-billion euro bailout — and being their most outspoken critic — in a quarterfinal showdown with political connotations.

"It's a result that shows our country is strong," said Stavris Helmis, 26. "Sport may not be the most serious thing, but it lifts our spirits."