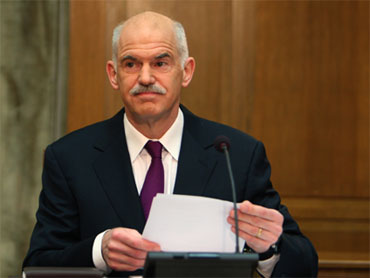 Prime Minister George Papandreou says that if Greece cannot borrow on terms that are similar to those enjoyed by other European Union countries, the results will be "worse than catastrophic."

Papandreou also says the country must take additional austerity measures in order to deal with an unprecedented financial crisis that has battered the EU's single currency. He made the comments Tuesday during a speech to his Socialist party deputies in Parliament.

On Monday, the EU finance chief said Greece must impose more painful, permanent spending cuts in coming days if it is to emerge from the crisis.

Papandreou's government has already announced a series of austerity measures, including higher fuel taxes, salary freezes and bonus cuts for the public sector, and an increase in the average retirement age, to deal with the debt crisis.

New measures could include more tax hikes and cuts in state workers' so-called 14th salary - part of annual pay held back as a holiday bonus. Unions, which have already held a series of strikes, have said curbing the 14th salary would be taken as "an act of war."

Greece's civil servants' umbrella union, ADEDY, announced another 24-hour strike for March 16, adding it might hold further walkouts along with the private sector umbrella union. Taxi drivers were already on strike, walking off the job Tuesday for 48-hours.

The demand for new measures come amid reports that officials in fellow European countries are preparing a financial rescue for Greece, to be finalized this week. Greek officials have refused to confirm the reports.

"Before discussions about aid, we expect Greece to complete its homework on consolidation policy," Westerwelle, who is also Germany's vice chancellor, told reporters in Berlin Tuesday.

He said the need to implement the austerity program to restore market confidence will also be discussed during a meeting with Papandreou in Berlin Friday.

Greece's decision to wait for market reactions to its latest budget cuts reflects a growing exasperation by government officials with financial speculators and their role in the debt crisis.

France's minister for European affairs, Pierre Lellouche, lashed out Tuesday against speculative traders who listen to "every word, every comma" uttered by government officials so they can bet on currencies. He insisted the 16-member euro-zone, to which Greece belongs, "is big enough and powerful enough" to manage its "monetary destiny."

Lellouche limited his remarks on EU efforts at economic governance because, he said, such comments are used "to make a lot of money speculating on the debt of such and such a country."

Hedge funds and other financial market players have been placing bets about whether Greece can handle its oversized debt - and the process has unsettled the euro's value.

A German financial watchdog, the Office for Federal Financial Oversight, said Tuesday it has been monitoring potential market speculation against Greece.

Spokeswoman Sabine Reimer said that dealings with credit default swaps for Greek treasury bonds have been monitored, but she didn't detail the length of the investigation.

Credit default swaps could be used by investors to bet on a rising spread - a measure of risk - between Greek bonds and the equivalent benchmark German issues. Rising spreads would make further borrowing for heavily indebted Greece even more expensive.

Reimer said that "the markets are very intransparent" and no clear evidence of manipulative trading or the contrary could be gathered.