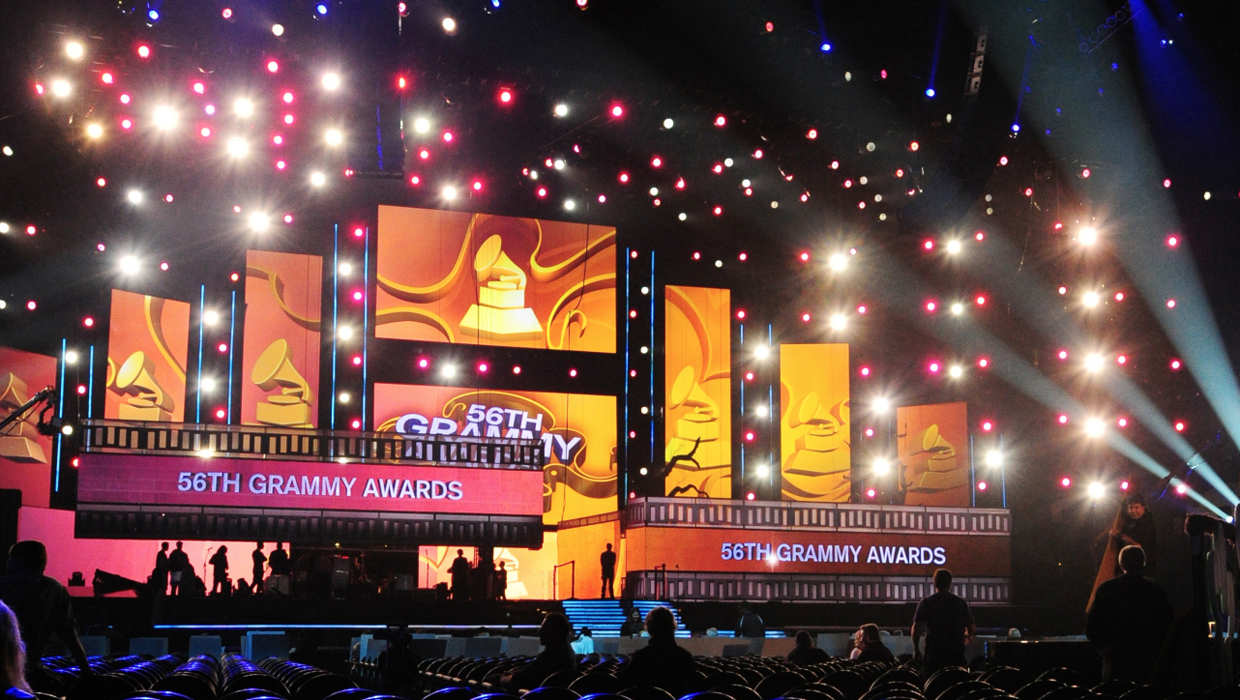 Los Angeles is filled to the brim this weekend with musical talent leading up to Sunday’s 56th annual Grammy Awards.

There’s a mix of new artists (Lorde and Kendrick Lamar) and veterans (Led Zeppelin and Paul McCartney) in the running this year. Jay Z leads the list of nominees with nine nods, and Kendrick Lamar, Macklemore & Lewis, Justin Timberlake and Pharrell Williams are not far behind with seven each.

Quite a few of those newcomers scored nominations in major categories, including Lorde and Macklemore & Lewis. But there are some familiar faces, too, with Katy Perry, Pink, Justin Timberlake and Taylor Swift all in the running for a gramophone trophy.

So who will walk away a winner on Sunday? Spotify, for one, made its predictions based on song and album streams -– and came up with the following picks:

There's really no way to tell who will take home awards until the winners are announced Sunday. It's all up to the Recording Academy's voters, but it's fun to make some guesses not based on numbers, too.

Daft Punk’s "Random Access Memories" made a splash in 2013 and has a shot at scoring the album of the year prize. New Zealand songstress Lorde had a really good run with "Royals" last year and is in a good position to score record of the year.

Song of the year goes to the actual songwriters, distinguishing it from record of the year, which honors the performer. This year’s song of the year nominees are "Just Give Me a Reason," Pink, Nate Ruess and Jeff Bhasker; "Locked Out of Heaven," Bruno Mars, Philip Lawrence and Ari Levine; "Roar," Katy Perry, Lukasz Gottwald, Max Martin, Bonnie McKee and Henry Walter; "Royals," Lorde and Joel Little; "Same Love," Macklemore, Ryan Lewis and Mary Lambert. This category is really a toss-up and could come down to “Just Give Me a Reason" and "Same Love."

All of the best new artist nominees are very solid this year -- and any one of them has a shot at winning. Still, signs are pointing to Macklemore & Ryan Lewis for this category.

The duo's song marriage equality anthem "Same Love" has had quite an impact. Melissa Etheridge, for one, is a big fan, telling CBS News, "My daughter comes to me, she’s 16. She says, 'You gotta hear this song.' I had not heard Macklemore & Lewis...She plays 'Same Love.' Destroys me. I'm weeping. Because there it is. There's that pop thing -- that pop mainstream, pop culture song just saying, 'Hey, let's just let that go.'"

Nominee Ed Sheeran didn't even expect to receive a nomination this year -- let alone one for best new artist. The English singer-songwriter, while new on the scene was nominated in the song of the year category last year for "The A Team" and even performed at the Grammys alongside Elton John. He told CBS News last month, "I didn't even know I was eligible to be nominated."

No matter who wins on Sunday, in the end, it's just an honor just to be nominated, right? Well, some stars seem to think so.

Gavin DeGraw is up a first-time Grammy for his duet with Colbie Caillat on "We Both Know" from the movie, "Safe Haven." The track is in the running for best song written for visual media, along with Coldplay's "Atlas" from "The Hunger Games: Catching Fire"; Jessie J's "Silver Lining" from "Silver Linings Playbook"; Adele's "Skyfall" from "Skyfall"; "Young and Beautiful by Lana Del Rey from "The Great Gatsby"; and "You've Got Time" by Regina Spektor from "Orange is the New Black."

"I'm beyond flattered and humbled by it," DeGraw told CBS News about the nod. "I've been putting albums out and songs out since 2003 and I’ve never had this opportunity before. At this point, I had accepted that I would not have this opportunity...You don't do it for the accolades but when they happen you are greatly affected by it...You feel as an artist or as a songwriter...that there's an element of legitimacy coming from your peers...It's really emotionally rewarding."

Ziggy Marley is also excited about his nomination best reggae album nod for "Ziggy Marley in Concert." The album is up against Beres Hammond's "One Love, One Life"; Sizzla's "The Messiah"; Sly & Robbie and the Jam Masters' "Reggae Connection"; and Snoop Lion's "Reincarnated."

"It was unexpected. I wasn't thinking about it. I was surprised. It's cool," he told CBS News about the nomination for his live album. "We were on tour for a while -- and said, 'Let's do some recording.' I liked the way it sounded. We put it out quietly and simply. And now we have a Grammy nomination, so that's good."

But the Grammys, of course, won't just be about prizes. There's the fun and risky fashion on the red carpet, and of course, the performances. Plenty of pairings are in the works, including a reported Beyonce and Jay Z collaboration.

Also planned for Music's Biggest Night is a special performance featuring Merle Haggard, Kris Kristofferson, Willie Nelson and nominee Blake Shelton. And Billie Joe Armstrong of Green Day and Miranda Lambert are teaming up for an "In Memoriam" tribute to Phil Everly, who died earlier this month.

Clive Davis, meanwhile, will host his annual pre-Grammy bash in LA with Miley Cyrus and Jennifer Hudson on board to perform.

The Grammy Awards will air live Sunday starting at 8 p.m. ET from the Staples Center in Los Angeles on CBS. LL Cool J will serve as host of the ceremony, and "NCIS" star Pauley Perrette will be on hand as social media reporter for CBS.

Go here to see a complete list of nominees and check out live red carpet coverage here on Sunday. And stay with CBS News Entertainment for all things Grammys.

Listen to some of the nominated music below:

Tell us: Who are your winning picks for the 2014 Grammy Awards?