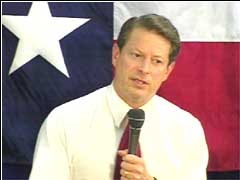 Uninvited guest Al Gore let himself into San Antonio and hit Texas Governor George W. Bush where it hurts, accusing his Republican rival for the White House of cutting taxes for special interests instead of helping poor families with their health care needs.

Texas, said the vice president, "should be a state where it's just as easy to raise a child as it is to set up an oil rig."

Gore paid brief tribute to the two-term Republican, saying Bush has a "warm and engaging personality," before pointedly remarking that the presidency "is more than just a popularity contest."

What his presidential rival has done, Gore said, is use a big but strained state budget surplus to cut taxes while leaving more than 1 million children uninsured.

"Instead the governor made his top priority a large tax cut for special interests," said Gore, the Democratic presidential contender.

On his way to Texas, Gore contended Bush's tax cuts have produced a budget shortfall, an assertion challenged by state officials who said any deficit will be covered by a surplus that has been built up.

That surplus, previously estimated at $1.1 billion, is actually about $1.4 billion, state Comptroller Carole Keeton Rylander said at a news conference on Thursday. Rylander, whose son is a Bush campaign spokesman, explained that post-facto adjustments are a normal part of Texas's biennial budget.

This year, she said, there were unforeseen costs in Medicaid and the Texas Forestry's fire suppression efforts. "My message to Al Gore is: there is no deficit. Stop putting out misleading information."

Bush campaign officials mounted their own counteroffensive against Gore's allegations. Campaign spokesman Ari Fleischer's take on the whole issue: "If this race comes down to Bush's stewardship versus Gore's leadership, that's a contest we would relish."

Still, Gore saw the potential to make political hay out of Bush's record, saying the state has the nation's worst record of industrial pollution and second worst rate of child poverty.

"Now, this is a wonderful state but I think it should be and I think most people agree should be a state where it's just as easy to raise a child as it is to set up an oil rig."

Before fousing on Bush and Texas' finances, an upbeat Gore stopped off at a San Antonio day care center, entertaining giggling 3-, 4- and 5-year-olds by balancing a broom on his nose for several seconds.

"Don't you try that at home. It could fall off your nose and poke you in the eye," he told them.

In San Antonio, childhood immunization rates are among the lowest for any big city, with only 70 percent of youngsters aged 19 months to 35 months getting needed injections.

Overall, Texas has one of the largest number of youngsters not covered by health insurance in the nation, with 1.4 million of the nation's 11 million uninsured children living in that state.

The 1.1 million population of San Antonio is about 60 percent Hispanic, a key demographic group in both campaigns. Bush carried the county in the last election, but Gore was seeking some inroads.

Gore's decision to invade his rival's home state is an aggressive one. In fact, the vice president was asked to compare it with a similar tactic in 1988. That's when Bush's father campaigned at polluted Boston Harbor to ridicule his then-Democratic presidential opponent, Michael Dukakis.

"It never crossed my mind," said Gore. "It really didn't."

Maybe only the accountants know which side is telling the truth about the Texas budget, but Bob Greenstein of the nonpartisan Center on Budget & Policy Priorities said neither Gore nor Bush really comes clean about the projected federal budget surplus.

"Not that many people are admitting the limits on what is available" to do with the surplus, he said.

As for both candidates' economic programs, "Gore is modestly over the top; Bush is way over the top. If you put all the things either party wants to do, let alone both … we're already over the top. What we have to do is set priorities," Greenstein added.

About Social Security and Medicare, tax cuts, and new spending on the environment and education, "We can't do all of them," said Greenstein. "We have to make choices."