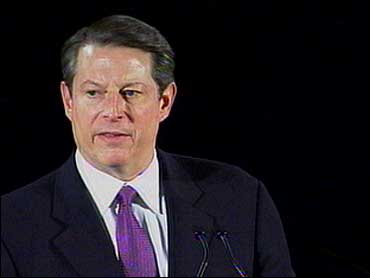 One day after making the surprise announcement that he would not run for president in 2004, Al Gore tried to explain his decision.

"It wasn't one thing," said the former vice president Monday. "It was a slow dawning on me that this was the right thing for a whole bunch of reasons."

The news was so surprising because Gore had been everywhere in recent weeks – promoting his books, making speeches, even appearing on "Saturday Night Live." But book sales were poor and so was Gore's ability to raise big bucks from political backers – maybe somber indications of what was to come if Gore had thrown his hat in the ring.

"I don't know what future holds. I'm exploring a lot of possibilities," Gore told a news conference in Raleigh, N.C. In a relaxed, joking speech, Gore said he was at peace with his decision not to run, which he said he made last Friday as he was preparing to appear on the NBC comedy show "Saturday Night Live."

"Because I have run for president twice before and because a race this time around will focus on a Bush-Gore rematch, I felt that the focus on that race would inevitably have been more on the past than it should've been when all races should be focused on the future,'' Gore said Monday.

"I thought for all those reasons it was right thing for me to decide not be a candidate this time. And I made the decision in the full awareness that probably means that I will never again have an opportunity to run for president and I'm at peace with that decision."

In a taped interview aired Sunday, Gore announced exclusively on CBS' "60 Minutes" that he will not make another run for president in two years.

"I've decided that I will not be a candidate for president in 2004," Gore told Lesley Stahl. "I personally have the energy and drive and ambition to make another campaign, but I don't think that it's the right thing for me to do."

Gore's decision opens the door for many of his former Democratic colleagues including former running mate Joe Lieberman, who had vowed not to run if Gore did.

"Obviously, in light of Al's announcement, I will spend time over the coming holidays talking with my family and friends, and announce my decision about a campaign for the presidency in early January," Lieberman said Monday.

Gore's absence could lure additional Democrats into the race.

His decision to pull out mirrored similar moves by big name Democrats in earlier years, which proved crucial to the outcome of elections.

In 1968, sitting President Lyndon Johnson opted not to run for reelection after a strong showing by Sen. Eugene McCarthy in the New Hampshire primary. That left an opening for Sen. Robert Kennedy, who was on his way to the nomination when he was assassinated.

In 1972, stung by the Chappaquiddick incident, Sen. Edward Kennedy chose to forgo a candidacy, allowing little-known South Dakota Sen. George McGovern to secure the party banner and lose spectacularly to incumbent President Nixon. Kennedy also could have run in 1976, when polls showed him ahead. He didn't; instead, little-known Georgia Gov. Jimmy Carter ran and won.

In 1992, New York Gov. Mario Cuomo was widely considered the front-runner until he suddenly took his name out of contention. Arkansas Gov. Bill Clinton ultimately secured the nomination and the presidency.

Many Democrats said they were surprised by the timing of the decision, which came after Gore spent several days in New York discussing his plans with family members.

Gore won the presidential popular vote by a half-million votes in 2000 but conceded to Republican George Bush after a tumultuous 36-day recount in Florida and a 5-4 Supreme Court vote against him.

Party activists were critical of Gore for losing despite a booming economy and eight years of a Democratic administration. Gore even lost his home state of Tennessee; a victory there would have given him the White House.

Gore disappeared from public view after the 2000 election. Gradually re-entering politics over the past year, he campaigned for selected candidates this year, made trips to Iowa and New Hampshire, then spent the last month promoting a book on the family that he wrote with his wife, Tipper, and giving interviews.

A year ago, Gore accepted the job of vice chairman of Metropolitan West Financial, a Los Angeles-based financial services holding company. He has been juggling that job with his duties as college professor, speaker and author.

Associates have said Gore was getting more comfortable with the idea of life as a private citizen. He made an appearance on NBC's "Saturday Night Live" this weekend that might have been considered risky were he seeking the presidency.

Gore ran unsuccessfully for the Democratic presidential nomination in 1988 and then, while a senator, was surprised to be picked as Mr. Clinton's running mate in 1992.

Mr. Clinton said Sunday night: "Al Gore was the best vice president America ever had. He would have been a fine president had history taken a different course two years ago."

Despite the praise Sunday night, not all Democratic activists spoke kindly of Gore over the last year. Many, both nationally and in key early primary and caucus states, said they were anxious for a fresh face. Gore said as much himself.

"I think that a campaign that would be a rematch between myself and President Bush would inevitably involve a focus on the past that would in some measure distract from the focus on the future that I think all campaigns have to be about," Gore said.