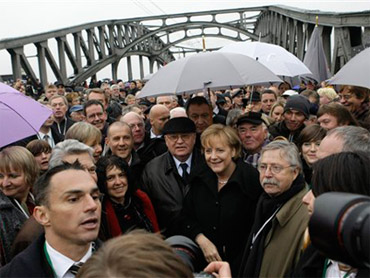 Chancellor Angela Merkel and former Soviet leader Mikhail Gorbachev crossed a former fortified border on Monday to cheers of "Gorby! Gorby!" as a throng of grateful Germans recalled the night 20 years ago that the Berlin Wall gave way to their desire for freedom and unity.

Within moments of a confused announcement on Nov. 9, 1989 that East Germany was lifting travel restrictions, hundreds of people streamed into the enclave that was West Berlin, marking a pivotal moment in the collapse of communism in Europe.

Merkel, who grew up in East Germany and was one of thousands to cross that night, recalled that "before the joy of freedom came, many people suffered."

She lauded Gorbachev, with whom she shared an umbrella amid a crush of hundreds, eager for a glimpse of the man many still consider a hero for his role in pushing reform in the Soviet Union.

"We always knew that something had to happen there so that more could change here," she said.

"You made this possible - you courageously let things happen, and that was much more than we could expect," she told Gorbachev in front of several hundred people gathered in light drizzle on the bridge over railway lines.

Read more on the 20th anniversary of the Berlin Wall's fall at CBSNews.com:

Tears sprang to the eyes of Uwe Kross, a 65-year old retiree, who recalled seeing the start of the drama on Nov. 9, 1989 from his home, a block away from the bridge.

"That night, you couldn't stop people," Kross said. "They lifted the barrier and everyone poured through.

"We saw it first on TV, normally it was very quiet up here, but that night we could hear the footsteps of those crossing, tap, tap, tap."

Kross was among those who crossed early on - so early that nobody was yet waiting on the other side when they reached the West. He recalled hopping on the first subway to then-West Berlin's main boulevard, the Kurfuerstendamm.

"All hell was breaking loose there," Kross said.

The leaders were joined by prominent former East Germans such as Joachim Gauck, an ex-pastor who later oversaw the archives of East Germany's secret police, the Stasi.

"Those in government thought they were opening a valve, but once it was open much more happened," Gauck said of the border opening. "A collapse followed."

The bridge crossing was one of a series of events marking Monday's anniversary of the border's opening after the wall kept East German citizens penned in for 28 years.

Music from Bon Jovi and Beethoven was to recall the joy of the border's opening, which led to German reunification less than a year later and the swift demolition of most of the wall - which snaked for 96 miles (155 kilometers) around West Berlin, a capitalist enclave deep inside East Germany.

Memorials also were planned to the 136 people killed trying to cross the border. Candles were lit and 1,000 towering plastic foam dominoes placed along the wall's route to be tipped over later Monday.

Also expected in Berlin for the ceremonies were the leaders of all 27 European Union countries and Russian President Dmitry Medvedev.

The wall's opening came hours after a botched announcement by a senior communist official on a cold, wet night in 1989.

At the end of a plodding news conference, Politburo spokesman Guenter Schabowski offhandedly said East Germany was lifting restrictions on travel across its border with West Germany.

Pressed on when the regulation would take effect, he looked down at his notes and stammered: "As far as I know, this enters into force ... this is immediately, without delay."

Schabowski has said he didn't know that the change wasn't supposed to be announced until the following morning.

East Berliners streamed toward border crossings. Facing huge crowds and lacking instructions from above, border guards opened the gates - and the wall was on its way into history.

Merkel said she was among the East Germans who, hearing Schabowski's words, thought "something might happen on the evening of Nov. 9." Like many others, she made her way across.

By the Brandenburg Gate, the symbol of Germany's division and then of its reunification, which for nearly three decades stood just behind the wall in no man's land, Dieter Mohnka, 74, and his wife Helga, 71, shared a bowl of French fries on Monday afternoon and recalled the night the wall was opened.

"We were shocked when we heard that announced, simply astounded," said Helga. "The next morning we went straight to visit my aunt in the West."

Dieter, a high school teacher at the time, said he had long been fascinated with West Germany.

"I was born in East Germany, I went to school in East Germany. I was supposed to teach the kids about the wonderfulness of the East, when I was secretly watching TV from the West," he said.