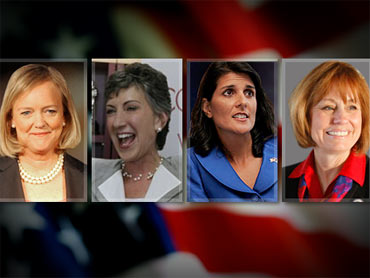 Female politicians, particularly from the Republican party, emerged as victors from Tuesday's elections.

Women remain underrepresented in government, in governors' offices and in the Congress: There are currently only six female governors, 17 female senators and 73 female House members. But in a year in which voters are looking for change, women seemed poised to gain ground.

In the 36 Senate races this year, at least 31 of the candidates have been women, though some have already lost their primary bids, according to the Center for American Women and Politics at Rutgers University. More of those candidates were Republicans. In addition to the number of female incumbents defending their seats in the House, 106 women entered the race this year as challengers, 60 of them Republican, according to the center. Dozens of women have also entered the 36 gubernatorial races under way.

Fiorina blew two male competitors out of the water, garnering 56 percent of the vote, and will now go on to challenge one of California's two sitting female senators -- Barbara Boxer, a three-term Democrat. Voters face a stark choice between Boxer, a liberal, and Fiorina, who worked hard to prove her conservative credentials in the primary. Fiorina was endorsed by conservative darling Sarah Palin and won the backing of the Susan B. Anthony List, a political action committee that supports anti-abortion rights female candidates.

Susan B. Anthony List President Marjorie Dannenfelser said California is a top priority for the group, which sees the state as a battleground that could set the tone for the rest of the country. She struck a note of optimism after Tuesday's elections.

Palin's spot on the GOP's 2008 presidential ticket as Sen. John McCain's runningmate introduced to the nation a kind of conservative, feminist politics that Palin and other conservatives say can make inroads around the country. Palin recently emphasized the power of female Republicans, calling them "mama grizzlies."

Watch CBS News Videos Online
Palin gave a message of congratulations today to the female candidates she endorsed, CNN reports. "It will be exciting to have these excellent candidates - especially those fearless GOP 'mama grizzlies' - take their message straight through to November and into office," she said.

Another Palin ally, Nikki Haley, came out on top last night in the GOP primary in South Carolina's gubernatorial race. Though Haley could not avoid a primary run-off, garnering just under 50 percent of the vote, she won more than twice the support of her closest rival. She has maintained a strong lead in spite of allegations that she has had extramarital affairs and racial slurs used against her because of her Indian background.

Tea Party-backed Sharron Angle won the GOP Senate nomination in Nevada and will challenge beleaguered Senate Majority Leader Harry Reid. Perceiving Angle as something of a fringe candidate, Reid's camp may have a stronger chance of winning in November now that Angle is the official GOP candidate -- but that has nothing to do with Angle's gender. The GOP establishment supported another female candidate thought to have a better shot, Sue Lowden.

If these women can beat their Democratic opponents, it would bolster the number Republican women currently serving in Congress, which includes just four of the 17 current female senators. They would also represent different types of Republicans, CBS News Political Analyst John Dickerson said today on CBSNews.com's "Washington Unplugged." (Watch the clip above.)

In addition to Tuesday's winners, the GOP can boast of even more female Senate contenders this year: Republicans Jane Norton in Colorado, Linda McMahon in Connecticut and Kelly Ayotte in New Hampshire are all eying Senate seats.

However, Democrats may not be ready to cede their advantage among women to Republicans just yet. Sen. Blanche Lincoln also managed to prevail in the Democratic primary run-off in Arkansas.