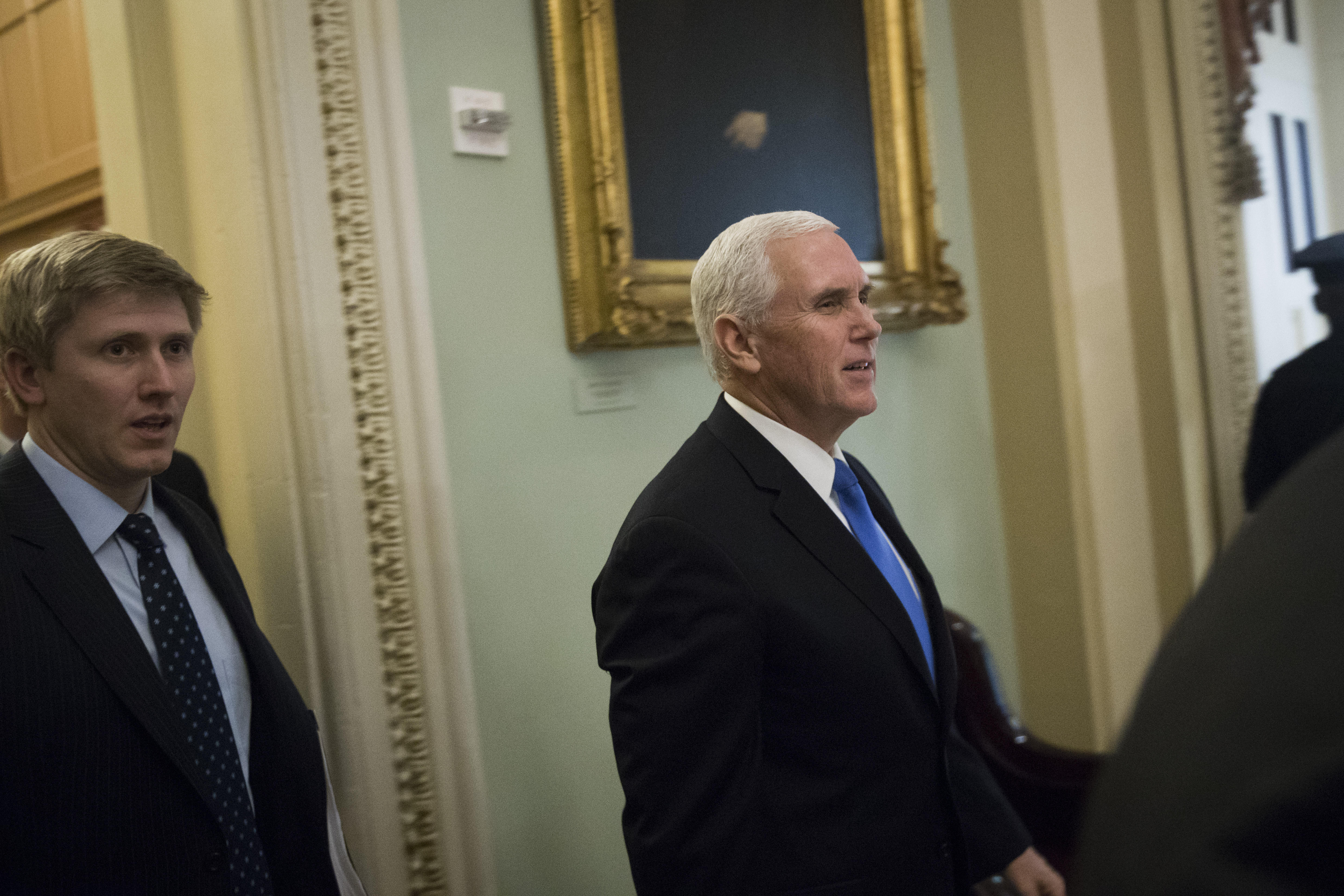 Republican senators debated the path forward for an overhaul of the nation's criminal sentencing laws Tuesday after a visit from Vice President Mike Pence, suggesting parts of the bill may need to be rewritten before Senate Majority Leader Mitch McConnell will hold a vote.

"I don't know why we would take the very limited time in a lame duck session when we're trying to secure our border, pass a farm bill, confirm all the judges who have been waiting for months," Republican Senator Tom Cotton told reporters Tuesday. "There are many senators who are very concerned about the public safety implications of this legislation. I would say that again, not many republicans campaigned on letting serious, violent, and repeat felons out of prison."

But despite support from the White House and a swath of GOP senators, McConnell has yet to agree to take up the legislation. Other senators in his caucus have objected to it, saying it would be too soft on drug offenders amid a national drug epidemic. Opponents have also voiced concerns that it could let some violent offenders out of prison.

Senators who emerged from the closed-door luncheon with Pence and Kushner said the legislation might need small tweaks before moving forward — potentially dimming the bill's prospects, as Congress has limited time left this year. Any changes could upset the carefully-crafted compromise.

South Dakota Sen. John Thune, the No. 3 Republican, said whether senators will be able to resolve their differences on the bill is "still an open question." He said he was among the lawmakers who were still undecided.

"If they would make some certain changes in the legislation, I think there could be a place where we could get to consensus," Thune said.

Thune didn't say what those changes would be, but South Carolina Sen. Lindsey Graham said there was a feeling in the room that "if we can clearly make sure that we not letting out early violent offenders, we're where we need to be."

A rare bipartisan coalition — including Trump, lawmakers from both parties, liberal advocacy groups and major GOP donors — is advocating passage of the criminal justice bill, which would revise 1980s and '90s-era "tough on crime" laws. Supporters say the changes would make the nation's criminal justice system fairer, reduce overcrowding in federal prisons and save taxpayer dollars.

Senate Judiciary Chairman Chuck Grassley said the bill's backers have already made many compromises to get senators and the White House on board.

"You just kind of have to go with what you have," Grassley said. "If I said to Sen. Joe Blow that I was willing to accept his amendment, then I might lose 10 votes on the other side."

McConnell would only say there was "extensive discussion" on the bill in the luncheon with Pence and they were counting votes "to see if there is agreement not only on the substance but the timing" of the legislation.

The legislation has been a top priority for Kushner, who has worked behind the scenes with supportive Republican senators over the last two years. Senators leaving the luncheon said Pence gave the bill a strong endorsement while Kushner stayed quiet. Opponents also made their case. Tennessee Sen. Bob Corker indicated the meeting was lively, saying, "The people that are for it are really for it and the people against it are really against it."

Graham said Arkansas Sen. Tom Cotton, a longtime opponent of the bill, led the arguments against it. Cotton suggested that a violent criminal will be let out of prison "and we're all going to lose our seats," Graham said.

Other Republican senators have said they are listening closely to Cotton. Florida Sen. Marco Rubio tweeted Monday that the Arkansas senator "makes a compelling argument." Louisiana Sen. John Kennedy said he will oppose the legislation because the premise that our system is unfair "has not been proven."

Trump endorsed the bill this month, giving it a huge boost. He said the proposal is proof that "true bipartisanship is possible." A group of Republicans and Democrats on the Senate Judiciary Committee, including Grassley and Democratic Sen. Dick Durbin of Illinois, has been pushing for action on criminal justice overhaul since former President Barack Obama's administration.

At a roundtable event Monday in Mississippi, Trump said the bill would "enact reasonable sentencing reforms to ensure fairness while keeping dangerous criminals off the street," adding that the legislation would revitalize the criminal justice system to be "tough on crime but also smart on crime."

The House approved a prison reform bill in May, but the proposed Senate package makes additional changes and adds the sentencing component. That means the House would need to revote on anything the Senate passes.

The Senate approach would allow thousands of federal prisoners sentenced for crack cocaine offenses before August 2010 the opportunity to petition for a reduced penalty. It would also lower mandatory minimum sentences for some drug offenses. The life sentence for some drug offenders with three convictions, or "three strikes," would be reduced to 25 years.

The federal inmate population peaked in 2013 at just more than 219,000. The total now stands at about 181,400, according to the Federal Bureau of Prisons. That's about triple the number of inmates in federal detention 30 years ago.

Roughly 90 percent of prison inmates are held in state facilities and would not be affected by the legislation.

Supporters insist they can get the needed 60 votes if McConnell would just put the legislation on the floor. They say it's crucial to pass the bill now, before they would have to start over in a new Congress in January. Holly Harris, executive director of the advocacy group Justice Action Network, says she believes McConnell will see the "policy value and the political value" and hold a vote.

"It's very rare that you have this door open, and if you have the door open you have to run through it," Harris said.