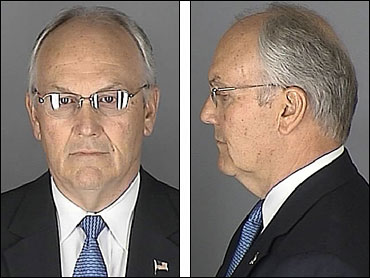 McCain said in a television interview that the decision was Craig's to make, "but my opinion is that when you plead guilty to a crime, you shouldn't serve. That's not a moral stand. That's not a holier-than-thou. It's just a factual situation."

"I think he should resign," McCain said.

Coleman said in a statement, "Senator Craig pled guilty to a crime involving conduct unbecoming a senator. He should resign."

The Senate's Republican Leadership released a statement saying that Craig has agreed to temporarily step down as the top Republican on the Veteran Affairs Committee, Appropriations Subcommittee on the Interior, and Energy and Natural Resources Subcommittee on Public Lands and Forests.

"This is not a decision we take lightly but we believe this is in the best interest of the Senate until this situation is resolved by the Ethics Committee," the statement read.

Craig pleaded guilty earlier this month to a charge of disorderly conduct following his arrest in a men's room at the Minneapolis airport after he allegedly tried to engage in a sexual encounter with an undercover officer. He has since recanted his guilty plea, and said on Tuesday he did nothing wrong.

Hoekstra said Craig "represents the Republican Party," and called for his resignation "as his conduct throughout this matter has been inappropriate for a U.S. senator."

Senate Republican leaders have called on the ethics committee to review Craig's case, and White House spokesman Scott Stanzel said Wednesday that he hoped the panel could do its work quickly.

"That would be in the best interests of the Senate and the people of Idaho," he said.

Stanzel made no expression of support for Craig. "We are disappointed in the matter. It has been referred to the Senate Ethics Committee, so they will have to deal with it," Stanzel said.

The scandal is the latest in a series involving Republicans that threaten to further tarnish the party's reputation. Polls showed that ethical lapses by Republicans played a role in allowing Democrats to win control of Congress during last year's legislative elections.

"I can never recall anything as poorly handled and as ineptly handled as the way Sen. Craig has done this. Republicans are just aghast at this," Schieffer said.

"I talked to several people up on the Hill yesterday whose attitude was, 'My God, what next?' It just never seems to stop. There will be a lot of pressure on this man to not run for re-election because the Republicans feel that's the one way they could lose the seat, if he decides to run."

Signs of difficulty for Craig came from outside the Capitol as well.

Tom Fitton, president of the Judicial Watch, issued a statement calling on Craig to consider stepping down. The organization is a self-described conservative government watchdog group.

While the Idaho Values Alliance called on Tuesday for Craig's resignation, Fitton's suggestion that the senator leave office suggested tenuous support among conservatives who make up his core political supporters.

Craig, 62, a third-term senator up for re-election next year, defended himself Tuesday against a police report alleging he attempted to engage in a homosexual encounter with an undercover officer.

Flanked by his wife, Suzanne, Craig stated three times that he was not gay. He cast his arrest for lewd conduct as unfounded and his subsequent guilty plea to disorderly conduct as an error in judgment spurred by frustration with the state's biggest newspaper prying into his past.

The Idaho Statesman published a lengthy story on Tuesday, a day after the June 11 arrest was first reported, detailing allegations of homosexual behavior by Craig. The senator denied the allegations and contended the paper was engaged in a witch hunt. In a statement, the newspaper said its story spoke for itself.

"While I was not involved in any inappropriate conduct at the Minneapolis airport or anywhere else, I chose to plead guilty to a lesser charge in hopes of making it go away," Craig said. "It's clear, though, that through my actions I have brought a cloud over Idaho. For that, I ask the people of Idaho for their forgiveness."

"I would encourage all Idahoans to avoid rushing to judgment and making brash statements about a man who has dedicated his life to public service," GOP state party chairman Kirk Sullivan said in a statement.

"I think what makes it very difficult is the guilty plea," said Randy Stapilus, a former political editor at the Idaho Statesman who has a political blog. "That is something a lot of people will have a tough time getting around."

In Idaho, with its 1.4 million people, politicians know many supporters by name. The state also likes its Republicans. The GOP controls the statehouse and Congress, and President Bush carried the state in 2004 with 68 percent of the vote.

Republican leaders in the Senate called for an Ethics Committee review of the case.

"This is a serious matter," they said in a written statement issued in Washington over the names of Sen. Mitch McConnell of Kentucky, the party leader, and several others.

Reports state that police Sgt. Dave Karsnia was investigating allegations of sexual conduct in Minneapolis airport restrooms when he went into a stall. The complaint against Craig alleged that he employed "a signal often used by persons communicating a desire to engage in sexual conduct."

Craig was arrested, read his rights, fingerprinted and photographed for a mug shot released by police showing him in coat and tie. He signed a guilty plea on Aug. 1 and later paid $575 in fines and fees and was placed on unsupervised probation for a year.

Rep. Mark Foley resigned nearly a year ago after being confronted with the sexual computer messages he sent to male teenage pages who had worked on Capitol Hill. Sen. Ted Stevens is under scrutiny for his relationship with a contractor who helped oversee a renovation project that more than doubled the size of the senator's home. Sen. David Vitter acknowledged that his phone number appeared in records of a Washington-area business that prosecutors have said was a front for prostitution.