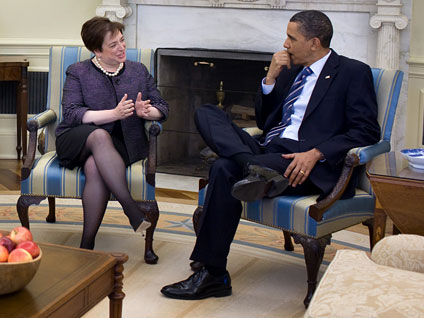 Republican responses to President Obama's selection of solicitor general Elena Kagan to replace Justice John Paul Stevens on the Supreme Court are pouring in, and they suggest GOP opposition to the pick may be grounded in large part to objections to Kagan's lack of judicial experience.

Kagan's experience includes arguing cases before the Supreme Court as solicitor general, teaching at University of Chicago Law School and teaching and serving as Dean of Harvard Law School, two posts at the White House under President Clinton, a short period in private practice, and clerk-ships for Judge Abner Mikva and Justice Thurgood Marshall.

But it does not include time on the bench, and Kagan, if confirmed, would be the first justice in almost 40 years to join the high court without prior judicial experience.

"Ms. Kagan's lack of judicial experience and short time as Solicitor General, arguing just six cases before the Court, is troubling," Sen. Jeff Sessions, the ranking Republican on the Senate Judiciary Committee, said in a statement. "The public expects Supreme Court nominees to possess a mastery of the law, a sound judicial philosophy, and a demonstrated dedication to the impartial application of the law and the Constitution. With no judicial opinions to consider, it will be especially important that other aspects of her record exhibit these characteristics."

Sessions also zeroed in on Kagan's opposition to keep military recruiters off the campus of Harvard Law because of the "Don't Ask, Don't Tell" policy, calling her "challenge to the unambiguous federal law requiring equal access for military recruiters" a "significant issue."

This sentiment was echoed by the top Republican in the House, John Boehner, who released a statement stating that "given her lack of judicial experience or time spent as a practicing lawyer, other aspects of her record must be thoroughly examined, including her troubling decision to ban United States Armed Forces recruiters from Harvard Law School." (As a member of the House, Boehner will not have a vote in Kagan's confirmation.)

While most Republicans are sounding relatively cautious notes about Kagan - suggesting that while they have concerns, they will keep an open mind - Texas Sen. John Cornyn, who is on the Judiciary Committee, put out a relatively aggressive statement hammering Kagan as out of touch with average Americans.

"There is no doubt that Ms. Kagan possesses a first-rate intellect, but she is a surprising choice from a president who has emphasized the importance of understanding 'how the world works and how ordinary people live,'" he said. "Ms. Kagan has spent her entire professional career in Harvard Square, Hyde Park, and the DC Beltway. These are not places where one learns 'how ordinary people live.' Ms. Kagan is likewise a surprising choice because she lacks judicial experience. Most Americans believe that prior judicial experience is a necessary credential for a Supreme Court Justice."

Also putting out a strong statement was Republican National Committee chair Michael Steele, who said Republicans will raise tough questions "given Kagan's opposition to allowing military recruiters access to her law school's campus, her endorsement of the liberal agenda and her support for statements suggesting that the Constitution 'as originally drafted and conceived, was "defective."'" (Steele's "defective" reference was to Kagan's comment that Justice Marshall had declared the Constitution defective as originally drafted and conceived. Marshall was talking in large part about slavery.)

"The American people expect judges to apply the Constitution and laws of the United States fairly and impartially--as they are written, not how they could have been written but were not," he said. "Even though the President who nominates them has personal policy preferences, judges must not be a rubberstamp for any administration. Judges must not walk into court with a preconceived idea of who should win."

"Judicial qualifications go beyond legal experience; any Supreme Court nominee should have an impressive resume," he said. "The more important qualification is judicial philosophy and a nominee's understanding of the power and proper role of a Justice in our system of government."

Hatch added that his past support for Kagan and her confirmation does not "establish either her qualifications for the Supreme Court or my obligation to support her."

Senate Republican Whip Jon Kyl, who like Hatch supported Kagan for solicitor general, also said he wasn't necessarily backing her Supreme Court bid: "As I made clear when I supported her confirmation as Solicitor General, a temporary political appointment is far different than a lifetime appointment to the Supreme Court," he said. (Two other Republicans who backed Kagan - Maine Sens. Susan Collins and Olympia Snore - released non-committal statements saying they would carefully examine Kagan in the coming weeks.)

The senator in perhaps the most awkward position around Kagan's nomination is Arlen Specter, the Pennsylvania Republican-turned-Democrat who voted against Kagan's nomination to be solicitor general in March of last year, when he was still with the GOP. Specter seems to have become somewhat more admiring of Kagan, applauding President Obama for selecting "someone who has a varied and diverse background outside the circuit court of appeals."

"I voted against her for Solicitor General because she wouldn't answer basic questions about her standards for handling that job. It is a distinctly different position than that of a Supreme Court Justice," he said. "I have an open mind about her nomination and hope she will address important questions related to her position on matters such as executive power, warrantless wiretapping, a woman's right to choose, voting rights and congressional power."