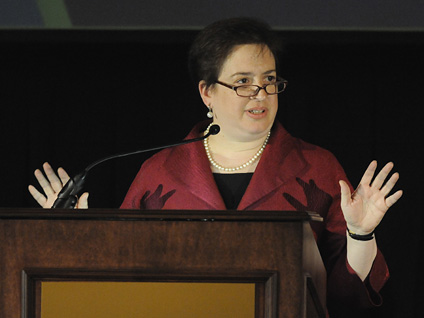 Elena Kagan, President Obama's pick to replace Justice John Paul Stephens on the Supreme Court, was easily confirmed to the position of Solicitor General last year by the Senate, by a vote of 61-31. But CBS News chief Washington correspondent and host of "Face the Nation" Bob Schieffer said the confirmation fight to get her onto the High Court will be "a really bitter and vicious one."

Reacting to the news of Kagan's nomination this morning on "the Early Show,", Schieffer said that he believes she is eminently qualified but that this is, after all, an election year, an "especially toxic election year" at that.

"Just this weekend, you saw the very conservative Bob Bennett, the Senator from Utah, lose the Republican nomination because members to the right of the party, a lot of Tea Party people, thought that he was not conservative enough. I think you will see some Republican Senators, moderates, giving very careful consideration to their vote on Elena Kagan. In a way, a vote against her would be 'Tea Party insurance,' to let people know that they're moving to the right.

"The Republican Party is moving very far to the right," said Schieffer. So while he believes she will pull through and be confirmed, "This is going to be a very, very difficult election-year argument on Capitol Hill."

One of four names being considered for the Supreme Court, Kagan gave the White House everything they wanted, according to CBS News chief legal correspondent Jan Crawford: "She's progressive, even though some people say she may be moderate, but she is a progressive; she will be a leader on that court; she can build coalitions, bring consensus together; and she's 50 years old."

Crawford did not think that Kagen would not spark a huge ideological battle against her confirmation, in part due to, as "Early Show" anchor Harry Smith suggested, her ability to get along with others. "It seemed she was almost as valued for her EQ as her IQ," Smith said.

"She actually has both," Crawford said. "I've known her for a long time, she was a professor of mine at the University of Chicago Law School, and she's very engaging very challenging, she's quite dynamic in her personality. And you see that when she's arguing cases before the Supreme Court. The Justices really like her — you should see Justice Scalia (obviously a conservative) and Kagan going back and forth. So the White House sees that as a real plus, and they expect her to be a very effective jurist on that court."

"Isn't it ironic," noted Smith," it appears the President of the United States during his State of the Union address specifically chastises the court for its decision on campaign finance reform, allowing corporations to put as much money in campaigns they want, and the person who argued against that was [Solicitor General] Elana Kagan."

"The problem for her and why this doesn't quite fit is that she's not really an everyday American — she's Upper West Side New York, Princeton, Harvard, Oxford. So, you know, she is part of that elite academic world."

Crawford noted that Republicans are already hammering Kagan as "a true Washington insider."

Some had suggested that another candidate for the position, federal appeals court Merrick Garland, would actually have been less of a battle to confirm. For one, Garland is personal friends with Supreme Court Chief Justice John Roberts, with whom he served on the bench.

But that choice may wait for a time when Democrats have even less of a majority in the Senate. "The president decided [Kagan] is my best card to play at this time," Smith said.