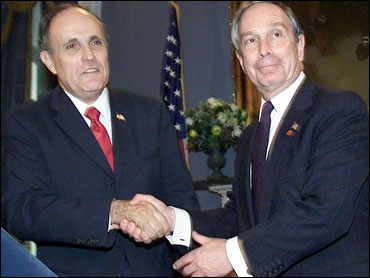 
As New York City ticks down two weeks until its first mayoral election since the one the traumatized city held two months after 9/11, former President Bill Clinton threw his political weight behind the Democratic candidate, whose campaign, by almost all account, is doomed.

Mr. Clinton took to the streets of the Bronx on Thursday, walking in stride with Fernando Ferrer, Mayor Michael Bloomberg's Democratic challenger, who is a former borough president and has been a fixture in New York politics for decades. Despite the fact Democrats outnumber Republicans five to one in New York City, Ferrer is trailing GOP incumbent Bloomberg by nearly 30 percentage points, according to a Quinnipiac University poll released last week.

If Bloomberg wins on Nov. 8, as he is poised to — and sees the term through — Republicans will have held the mayor's office for 16 straight years. That's the longest stretch of GOP leadership in New York City in the party's history. Even in the 1930s and '40s, the run of celebrated Mayor Fiorello LaGuardia lasted only 12 years.

How has the city the rest of America sees as a sanctuary of liberalism become a bastion of Republican metropolitan power?

"Giuliani changed things. Before him, there was a sense that New York was done," political author and Cooper Union professor Fred Siegel told CBSNews.com.

But political observers such as Muzzio are quick to point out that Giuliani only took office after losing a close mayoral race to Democrat David Dinkins and then winning very narrowly in a second run in 1993.

Eight years later, when the airliners crashed into the twin towers on Sept. 11, 2001, spiraling the country into a war and making New York City America's Ground Zero, New Yorkers were hitting the polls for the primary of what looked like an election that would hand the mayor's office back to the Democrats.

Representatives from every part of the political spectrum recognize the event's political reverberations.

"After 9/11, right away, it seemed we didn't have time for politics," said Republican consultant Susan Del Percio. Before 9/11 in the '01 race, Democrat Mark Green had a lead in the polls against Bloomberg, but "Rudy said of Bloomberg, 'this is my guy,' and the impact of that was huge."

"Nine-eleven was the perfect storm" for Republicans, Muzzio said. The political change not only made billionaire Bloomberg's resume as a businessman look more impressive, but "the emerging sainthood of Rudy Giuliani" became a factor in the third GOP mayoral race win in a decade.

So is the current Republican run, after a century in New York with only three GOP mayors, an anomaly?

"New York City is a blue city in a blue state. That's not changing," Muzzio said.

"This city is not about to become a Republican city. There is an argument that when things get tough, Republicans get elected," she said. "In a sense, that's what's happened here."

Hers is a popular sentiment amongst Democrats, also used to explain the post-9/11 Republican leadership in Congress and the White House. But the political or cultural waves of what's happened in New York might not represent the political movements in the rest of the United States.

While New York may be the cultural capital of America, with a slumping murder rate, a skyrocketing wealth gap and more liberals per capita than almost anywhere else, the city can hardly be said to represent the rest of the United States.

Here, Republicans aren't staunchly conservative; both Giuliani and Bloomberg are former Democrats. And conservatives like the three who sit on New York's 50-plus member City Council have labeled Bloomberg a RINO: Republican In Name Only.

"There will have been 16 years of Republican mayors in New York, but no Republican Party," Siegel said.

Perhaps perceiving his weakness, Ferrer has been calling in the Democratic big guns: Howard Dean, John Edwards, John Kerry and now Mr. Clinton have all appeared with or fundraised for Ferrer.

While Ferrer may be able to gain strength from the Democratic establishment, the opposite may be true for Bloomberg and his party.

Although Bloomberg might call upon President Bush, he wouldn't do it too frequently or enthusiastically, GOP consultant Del Percio said.

"Ferrer's Hail Mary pass is to associate Bloomberg with Bush," she said. "When you want to do a smear campaign on a Republican here, call him a Republican."

The successes of Giuliani and Bloomberg have already turned them into political icons. Could other Republicans follow these moderates' leads?

"New York doesn't indicate much about how national races will work because, here, people vote for candidates over parties," Muzzio said. "At a national level, Republicans are more disciplined."

"Yes, New York is its own world," Del Percio said.