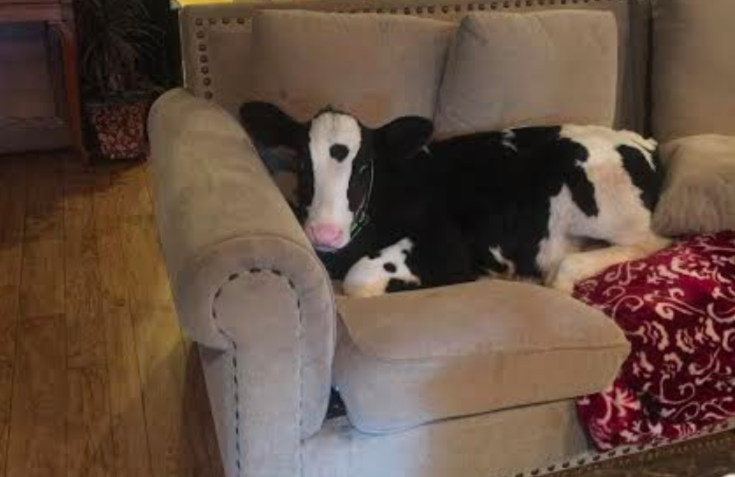 Goliath is just another member of the Hubbs family.

He eats food from a bowl, snacks on dried prunes and lounges on the couch inside his Danville, California, home.

But Goliath isn't your average dog; he's actually a cow.

"My cow thinks he's a dog...We left the door open for five minutes," 17-year-old Shaylee Hubbs wrote as she tweeted a photo of the baby cow laying on a couch. The tweet was shared by more than 30,000 people.

The Hubbs family got the "drop calf" from a dairy farm when he was just one day old.

Weak and fragile, the sick cow was struggling to eat without help. Two days later, with medication and health care from veterinarian Ann Marie Buonanno, the cow eventually started to gain strength.

His appetite began to increase and his energy level rose, too. Pretty soon Goliath began "playing, bucking, kicking and running" around the family's backyard.

"Goliath is our pet and now part of our family," Hubbs told CBS News, which includes the family's dog, Leonidas.

Leonidas took the cow under his wing, licking and nudging him to stand up.

"He would lay down with the sick little cow for hours just to keep him company," Hubbs described. "As the cow became more active he began to try to 'nurse' my male Great Dane."

At night, Goliath sleeps in a playhouse in the backyard. When morning strikes, he wakes up and stands at the back door -- his hot breath fogging up the window -- to wait for the Great Dane.

Goliath lives on a ranch with a new family full of alpacas, sheep, goats, horses, mini-horses, chickens and a bunny -- but none of them have a relationship quite like him and Leonidas.

Last week the family couldn't find Goliath. They searched the backyard, checked for open gates and then walked into their house and there he was, sitting in Leonidas' favorite spot.

"Look who we found lounging ever so comfortably on our couch -- Goliath," Hubbs said. "This was triumph and victory; a nice comfortable place on the couch."

Goliath had a rough start, but with a little help from his friend Leonidas, he'll live comfortably.