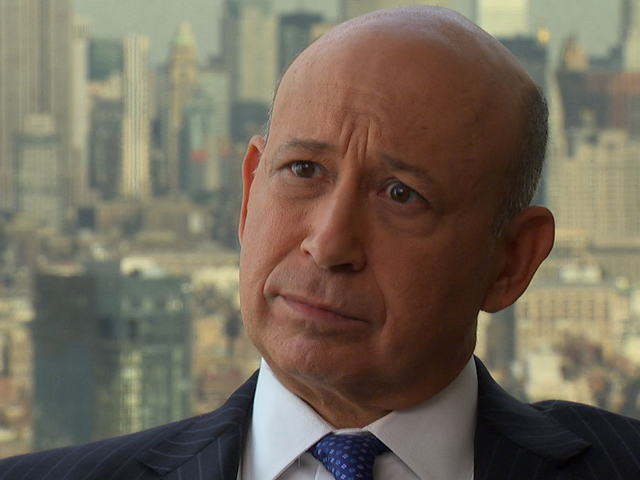 (CBS News) Stocks shook off their post-election slump Monday, in part because of optimism that the president and Congress will reach a compromise on the nation's budget by the end of the year.

If they don't, there will be automatic tax increases and huge cuts in federal spending -- that so-called fiscal cliff.

It's a time bomb, according to Lloyd Blankfein, chairman and CEO of Goldman Sachs, and one of the world's most influential bankers. His message to Washington? Make a deal.

BLANKFEIN: Their job is to make the country function, not to -- it's not a winning game, it's a get-along game.

An interview with Lloyd Blankfein is as rare as a look inside the Goldman Sachs money machine. He showed us one of seven trading floors at his Manhattan headquarters. Goldman is one of America's most successful investment banks. It had net earnings of $4.4 billion dollars last year. When we asked Blankfein how to reduce the federal budget deficit, he went straight for the subject politicians don't want to talk about.

PELLEY: Because we can't afford them going forward?

BLANKFEIN: Because we can't afford them.

We wondered whether he thinks the government needs more revenue in the form of higher taxes.

BLANKFEIN: In the long run, there has to be more revenue. And, of course, the burden of that revenue will be disproportionately taken up by wealthier people. That's just logical.

PELLEY: Why is an increase in revenue, in tax money, necessary? Why can't you just cut your way out of the deficit?

BLANKFEIN: For sure certain people in this country wouldn't like the society you would have if you did that, and personally, I don't think I would like it either, if we went as far as to close our entire budget deficit in that way.

PELLEY: What kind of society would it be?

BLANKFEIN: I think it would be one where the safety net would be more porous and lower to the ground.