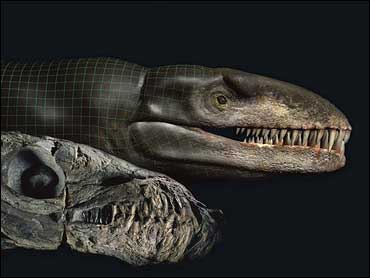 In the era when dinosaurs ruled the Jurassic earth, a 13-foot oceanic crocodile with a short snout and a mouthful of deadly teeth hunted large creatures in the sea, scientists reported Thursday.

Nicknamed "Godzilla" by its discoverers, the new find was much different from other marine crocodiles, which had long snouts with many small teeth.

The discovery of the creature, given the scientific name Dakosaurus andiniensis, was reported Thursday in ScienceExpress, the online edition of the journal Science.

"This animal was one of the latest members of its family and certainly the most bizarre of all marine crocs," said Diego Pol of Ohio State University, one of the authors of the report.

Lead author Zulma Gasparini of Argentina's National University of La Plata said the "animal's anatomy is really a contrast with that of the other sea crocs that developed during the Jurassic," about 135 million years ago.

The long narrow snout and small teeth of most crocs indicate feeding on small prey, Pol said, while Dakosaurus' large serrated teeth indicate a carnivore that would have hunted large prey.

Stunning new image of Earth at night released by NASA

"This was a top predator that probably was 13 feet long and swam around using its jagged teeth to bite and cut its prey, like dinosaurs and other predatory reptiles did," Pol said.

Instead of legs, Dakosaurus had four paddle-like limbs and a vertically oriented, fishlike tail. Dakosaurus would have regularly surfaced to gasp oxygen and then could dive into the ocean.

"We are calling him the 'chico malo' — 'bad boy"' of the ocean, said Gasparini.

While Dakosaurus had been known from a few bone fragments previously, the new detail comes from a complete skull found in Argentina in 1996 and studied by Pol, Gasparini and colleagues. The area where it was found had been a deep tropical bay during the Jurassic period.

The world's relatively shallow seas between 230 million and 65 million years ago contained several large animals, such as the plesiosaur with a 20-foot neck and the giant ichthyosaurs that could be 75-feet long.