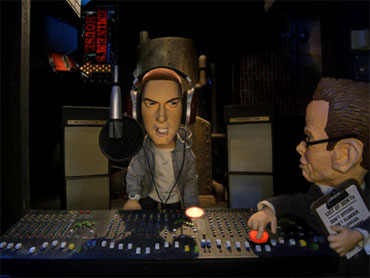 In the Super Bowl of advertising, Eminem was everywhere, Roseanne Barr took a big hit from a log and Joan Rivers became a GoDaddy girl.

It was also hard to throw a Pepsi can without hitting a car commercial during Super Bowl XLV between the Pittsburgh Steelers and Green Bay Packers. Automakers took advantage of advertising's biggest showcase to try to show they're back after two tough years for the industry.

After avoiding the Super Bowl for two years as it went in and out of a government-led bankruptcy, General Motors came back with five ads for Chevrolet. In one ad, a seemingly mundane car dealership ad is disrupted when a Camaro suddenly morphs into the Bumblebee character from the "Transformers" movies. Chrysler was expected to push the limits of how long a Super Bowl ad could be with a two-minute commercial featuring rapper Eminem.

This Year's Super Bowl Ads - Have a Look!

Overall, celebrities and humor dominated the commercials, which wooed 100 million-plus viewers at cost of $3 million per 30 seconds.

Slapstick violence was the theme of several of PepsiCo's Pepsi Max and Doritos ads, which were created by consumers and voted on in an online contest called crashthesuperbowl.com. A man got hit in the crotch with a speeding can in one ad, and a jogger got clocked on the head with another flying can. A man taunting a dog with Doritos wound up underneath a glass door.

But Light ads included an "Extreme Makeover"-style show where the only thing that is made over is a can of Bud Light on the counter. A Budweiser ad showed an intimidating cowboy belting out Elton John's "Tiny Dancer" after he gets a Bud.

The Budweiser ad used the brand's trademark Clydesdale horses subtly and effectively, said Tim Calkins, Clinical Professor of Marketing at the Kellogg School of Management. "It kept the equity of the Clydesdales, while at the same time delivering more of a benefit about the product," he said.

Some funny and creative ads, predictably, drew criticism for being entertaining without doing much to sell people on the item being advertised.

Among those was an ad for Lipton Brisk Iced Tea in which an animated Eminem explains why he doesn't usually do endorsements. He throws a business type off a roof when he refuses to rename the drink "Eminem."

"It was confusing, and it didn't say a lot about the product," he said.

Miserable office workers starred in several commercials. Careerbuilder.com brought back its office chimps, this time driving cars, and blocking and then crashing into a hapless office employee who is "stuck between a bad job and a hard place." Bridgestone showed an office worker driving around town to steal co-workers' computers after being told he hit "Reply All" to an e-mail.

Not all ads were funny. Motorola Mobility's 60-second spot during the second quarter played off of the famous Apple ad "1984." The dialogue-free Motorola ad shows a world where drones dress all in white and wear Apple iPod-like earbuds and a man uses a Xoom tablet to free and woo a girl.

The message is that Apple has become an oppressor rather than a liberator, and show Motorola's tablet as a worthy opponent to Apple's popular iPad, said Bill Ogle, chief marketing officer of Motorola Mobility.

"A lot of people just try to go for laughs," he said. "There are all kinds of sex and monkeys and horses (during the Super Bowl), but what we were trying to do is a bit more of a serious story."

The automaker ads, usually known for beautiful pictures of cars winding down mountain roads but not for being memorable, used humor and surprise to try to remedy that.

One early hit was a Volkswagen's ad that showed a boy in a Darth Vader costume trying to use "The Force" on objects, including the Passat.

"It really wasn't selling a car, it was selling a feeling, and it tapped into its target market of families very effectively, which you usually don't see in a car ad," said Robert Colt, an instructor at Michigan State University College of Communication Arts & Sciences.

Volkswagen released the ad early on Youtube.com and it became an instant viral hit, with more than 13 million views before the game even started. If the ad wins the annual USAToday Ad Meter poll, it will be a first.

The highest an automaker has ever gotten is third place, which a Nissan ad nabbed in 1997.