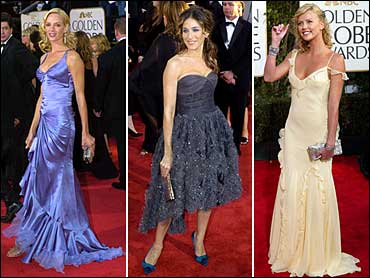 Hollywood turned it spotlight on the Golden Globes Sunday night, where all of the nominees came dressed to dazzle.

A return to '30s- and '40s-style glamour was the theme for the evening. Actress Nicole Kidman epitomized the look in a bare, gold-sequined, backless gown.

Sparkles and spangles seemed to adorn everything from dresses to purses. Earrings were long and jewelry was chunky.

David Evangelista was on the red carpet along with one of his co-hosts on "The Style Network," Finola Hughes. The next morning on Monday's The Early Show, they dished on who looked fabulous, who sparkled from head to toe and who needed more work.

The best dressed for Evangelista was Uma Thurman in her purple gown and Charlize Theron, as a classic '40s beauty in a pastel dress.

"She looked like a little buttercup," Hughes says about Theron. Another of her favorite looks was worn by Sarah Jessica Parker. Hughes says, "I thought this dress was beautifully made. When she got on stage, it really sparkled and she had these really spiky, spiky shoes."

"Superfoods" To The Rescue!

Another favorite of the night was Nicole Kidman in a dress designed by Tom Ford in his last collection for Yves Saint Laurent.

Evangelista says Kidman looked like the classic Vegas showgirl and jokingly proposed giving her the Show Girl Award. Hughes thought Kidman looked uncomfortable wearing a gold-sequined bodice, with a neckline that plunged to her waist, held together with nude fabric and paired with a flowing, pale chiffon skirt. Her loose curls were held back with a sparkly, gold headband.

As for the worst dressed, Evangelista gave the trophy to Debra Messing. "She looked like Count Chocula," he says.

Hughes, in her defense, notes, "Debra Messing is quite pregnant and when you're pregnant, you tend to try to dress in a dramatic way to take away from your bump."

Others who got dressed without a mirror, according to Evangelista: "Barbra Streisand looked awful in all white. Scarlett Johannson wore cream and just blended into herself. Diane Keaton looked like she was a member of the clergy. Sharon Stone totally dressed down, all wrong."

Hughes adds, "Diane Keaton, it's like she makes day-wear choices to attend evening events. It's interesting but I don't understand it. Scarlett looked like her hair was waiting for a wig."

Both stylists pronounced Jennifer Aniston's Valentino safe and boring. Evangelista says, "She plays it safe with the dark colors." Hughes adds, "I sort of feel like I have seen her in this dress before."

For most improved, Portia de Rossi from Ally McBeal was Hughes' pick. "She was the most improved because we've seen her on the red carpet before and she's had a lot of misses. This year, she was a big hit. This is retro, the retro '30s." She also liked her makeup. "Sometimes she does overdo."

Evangelista agrees, adding, "Her hair was dead-on. She knew how to work her mink. She looked gorgeous and glamorous."

The most disheveled look went without a doubt to Kevin Costner, Evangelista says, "He looked like he just got out of bed. He just woke up."

The men usually get overlooked but Hughes notes, "William Peterson did the whole monochromatic thing and did it well. And I thought Bernie Mac looked smart. He seemed to really take care in his appearance."

Evangelista says, "Tom Cruise looked very handsome. William H. Macy, classy and elegant in his tux. He even had on a pair of '40s-style sunglasses. And Johnny Depp looked great with his hat. He's a man with his own style."

As for this year's trends, the style experts note it was a return to elegance.

Evangelista says, "Lots of satin and sparkle. There was also lots of color. Ellen Burstyn in orange. She looked like an orange. J-Lo in coral, Diane Lane in a coral print."

Hughes adds, "I loved Ellen in orange. I loved Diane Lane's dress with the ruffles. Jennifer Lopez's dress had a great cut."