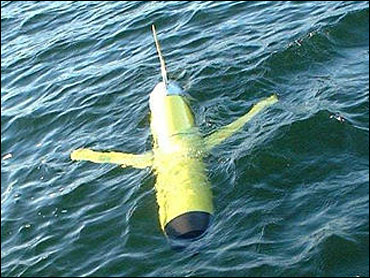 A century after the Wright Brothers first took to the skies, the world of flight is pushing to new depths.

Researchers are perfecting innovative gliders that can swoop and soar on journeys covering hundreds of miles and lasting for weeks - all deep beneath the ocean waves.

The fledgling technology, barely a decade old, has already produced robotic submarine gliders that move slowly, with the nimbleness of a blimp. Now next-generation gliders are being developed to fly just as gracefully as their airborne counterparts, diving and climbing on broad wings that slice not air but water.

"They're coming of age," said Clayton Jones, project engineer at Webb Research Corp., an East Falmouth, Mass., company that has sold 21 of the $60,000 ocean gliders it builds.

The submarine robots don't use propellers, jets or flapping wings to get about. Nor do they swim.

Instead, they pump ballast water in and out to subtly change their buoyancy. That enables them to alternately rise and fall through the ocean as they glide forward.

The battery-powered gliders have quickly lured the interest of marine scientists who have fitted early models with instruments that measure ocean currents, salinity and temperature. Scientists hope that eventually the gliders could be used to monitor pollution levels, keep tabs on plankton blooms and, quite literally, "swim with the fishes" or other prey.

"They could follow schools of fish - or Russian submarines," said Scott Jenkins, an engineer and glider expert at the Scripps Institution of Oceanography in San Diego.

The gliders are as efficient as they are stealthy, which has drawn the interest and backing of the U.S. Navy. Potential military applications include mine detection, surveillance and patrol, Navy officials said.

The Navy hatched the glider concept in the early 1960s but the idea soon lost ground to propeller-driven submersibles. The idea was proposed again in the late 1980s when engineers realized the technology could spawn thrifty gliders that could embark on watery flights lasting months and miles at a time.

"What they bring to the table is a persistence, a long-term deployment capability," said Thomas Swean, team leader for ocean engineering and marine systems at the Office of Naval Research in Arlington, Va.

The aerodynamic principles that guide ocean gliders are the same that apply to airborne gliders, except the underwater versions can climb every bit as effortlessly as they dive.

An important stage in glider development came last summer, when scientists deployed 15 of the robots in Monterey Bay in the first large field demonstration of the technology.

"We've just handed the adolescents the car keys," Jones said. "They're driving around the block and they're doing what are the first glimpses of what we hope to accomplish."

Still, Jones acknowledges that expectations for these autonomous underwater vehicles, or AUVs, have to be reined in for now.

Problems include the build up of barnacles on long flights, which create drag. At the surface, ships, kelp and curious fisherman also pose risks, said Ralf Bachmayer, a Princeton University glider researcher.

During the August experiments in Monterey, fishermen plucked four of the gliders from the water after the robots briefly surfaced to communicate with scientists by satellite. Three of the gilders were recovered intact; the fourth was found on shore in pieces.

The first generation of gliders look like little more than 6-foot torpedoes fitted with stubby wings that provide the lift needed to move them forward.

For now, experts concede the early robots, built by Scripps, Webb Research and the University of Washington, are basically glorified underwater blimps capable of flights measured in weeks and hundreds of miles.

But engineers designing the next generation of gliders promise huge gains in efficiency, range and speed. Assisting them is the more than 100 years of studies on aerodynamics undertaken since the days of Orville and Wilbur Wright.

"There are no new principles being invoked here," Swean said. "The sea is a very, very harsh environment but it is a fluid. Air and water, except for their densities, are very similar creatures."

The boldest new ocean glider is a large flying wing the Navy is developing with Scripps that should be more B-2 than blimp.

Engineers hope to begin testing the 20-foot, delta-winged prototype this February off the San Diego coast.

Preliminary analysis of the design suggests its shape should produce speeds up to 10 times as fast as today's gliders, which fly at a pokey half-mile an hour. It also should fly more efficiently than its torpedo-shaped predecessors.

Other varieties of glider, now being tested, will be even more efficient and forgo the use of batteries altogether. Instead, they will draw their power from the ocean itself, gathering energy from the warmth of the water around them.

"It's like an external fuel tank," Jenkins said. "It's everywhere you go and you just have to sip from it."

Such self-sustaining gliders, according to the Navy, could undertake missions that span as many as five years and thousands of miles.