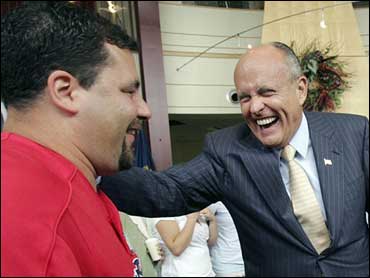 Presidential hopeful Rudy Giuliani said Tuesday that people who want to legalize marijuana for medical purposes really just want to make the drug available to all.

"I believe the effort to try and make marijuana available for medical uses is really a way to legalize it. There's no reason for it," the former New York mayor said during a town hall-style meeting at New Hampshire Technical Institute.

He also said there are better alternatives.

"You can accomplish everything you want to accomplish with things other than marijuana, probably better. There are pain medications much superior to marijuana," he said.

"We'd be much better off telling people the truth. Marijuana adds nothing to the array of legal medications and prescription medications that are available for pain relief."

After a speech at the first of several stops in the first-primary state, the early front-runner in the race for the Republican nomination fielded questions. None dealt with the unpopular war in Iraq.

Instead, voters wanted to know about the failed immigration bill and Giuliani's views on climate change and health care.

Giuliani said promises of universal health care are hollow and simply not manageable.

"If you try to do socialized medicine, a la Hillary Clinton, John Edwards, Barack Obama or Michael Moore, you're going to end up with a disaster," he said.

He urged voters to press other candidates for specifics and to move beyond highfaluting language.

Later, while visiting a deli and store in Hooksett, he explained why he hadn't been in New Hampshire as frequently as some of his rivals.

"You've got to talk about other people about strategy of the campaign. I go where they tell me," he joked with reporters.

Later on Tuesday, Giuliani spoke to a town hall-style meeting at a Nashua hotel. He warned against terrorism — a central argument for his candidacy. He said Democrats wouldn't keep the United States safe and that no matter what happens in Iraq, the larger war against terror would continue.

He rejected an audience member who asked whether Giuliani thought U.S. foreign policy was in part responsible for the Sept. 11 terrorist attacks.

The questioner said he based his question on his reading of the 9-11 Commission report. Giuliani said that he didn't agree the commission — on which he briefly served — came to that conclusion.

"It had nothing to do with our foreign policy. Our foreign policy could change tomorrow and they'd still want to attack us. ... They want to kill us and attack us because we represent the infidel, modern world."
reads.