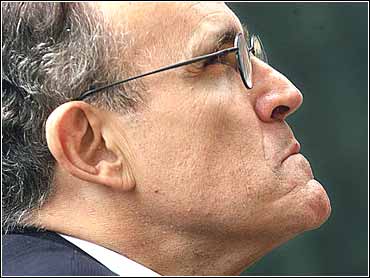 The filing by Donna Hanover, 52, came more than a year and a half after Giuliani filed to divorce her, citing cruel and inhuman treatment.

Hanover's lawyer, Helene Brezinsky, said her client rejected the grounds on which Giuliani's divorce was based.

"If there's going to be a divorce, let's have the truth about why — Rudy's open and notorious adultery," she said.

Giuliani spokeswoman Sunny Mindel replied: "There is no purpose in responding to this mudslinging."

Hanover's filing came June 10 in State Supreme Court. During the last months of Giuliani's tenure, his girlfriend, Judith Nathan, became the city's de facto first lady and appeared with him at official functions.

Meanwhile, the judge hearing the divorce agreed Thursday to increase the amount Giuliani pays to support his two children with Hanover — Andrew, 16, and Caroline, 12 — and for other expenses.

The amount will be raised to $24,000 a month from $1,800 a month. The judge said the change was justified by Giuliani's own admission that this year his income from speaking engagements alone will exceed $8 million.

Hanover had asked for nearly $1 million a year in child support and other expenses.