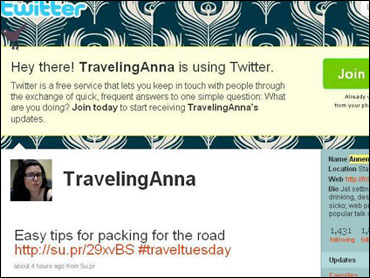 NEW YORK (CBS/AP) A hold-up at an HSBC bank in New York yesterday may have intimidated the bank-tellers, but it could not stop one avid tweeter: 26-year-old Annemarie Dooling, who tweeted her dispatches from the scene of the bank robbery.

Not everybody is happy about it.

Earlier on Tuesday, Dooling had twittered that she was "So tired today, really really tired. ugh."

A couple of hours later, things really picked up.

"My bank was just held up; with me in it. HSBC 34 and 8," the web producer messaged her more than 1,900 followers just after 9 a.m. under her Twitter name, TravelingAnna, referring to 34th Street and 8th Avenue in Manhattan. "Also my whole trackball is GONE!!! I'm locked in the bank still."

And thus began a rather unusual Twitter thread; a bank heist, or at least its immediate aftermath, in 140-character-or-less updates. Was it the first bank heist to be tweeted? The folks at Twitter Inc. did not immediately respond to a request for comment.

As for police, they confirmed the robbery and said the unarmed suspect, who had given a threatening note to the teller, fled with $500.

It should be pointed out that Dooling isn't asking for the key to the city; police had already been alerted by more traditional means, with a 911 call. And actually, Dooling was too busy, well, looking at her BlackBerry, to be the first to notice the heist.

But she also didn't expect to be criticized online, by folks who apparently thought she should have been alerting police or doing something else - anything - rather than tweeting.

"Honestly, the cops were called and everyone was safe and my main concern was reaching out to my friends, fam, and co-workers, which is why I tweeted," she said later in an e-mail to The Associated Press.

Dooling, who lives on Staten Island, said she entered the bank near Manhattan's Penn Station just after 9 a.m., filled out a deposit slip and got in line.

"The tellers were all very nervous and looked upset," she said in the e-mail. "I couldn't see anything but a man was at the teller. I was having phone problems and trying to fix it so I was looking down and flipping through my BlackBerry."

"Finally, a man ran out, the doors closed, managers ran out, the tellers closed their windows and the bank closed," Dooling said. She tried to call work to say she'd be late, but because of the aforementioned phone problems, could not. Nor could she e-mail.

And so she tweeted.

- "they want to question us. i didnt even notice this gappenning (sic) while i was standing there.

- "no i didnt hit the floor. i didnt even notice and he was two people in front of me."

- "we are fine. cops questioning us now."

Just in time for a little comic relief, the scene turned jovial.

- "cops just said 'wouldnt it be boring if they all did it the same way?' ha. just let me out, Paul Blart (a reference to the "Mall Cop" movie character)."

- "oh now we're discussing 'Heat.' Some bank robbery comedy going on here folks, come on down ... im the sad one in the window."

Then Dooling saw some of the criticism.

- "someone on Gothamist just told me to fall down a man hole. geez, get a life, buddy."

- "cant defend my honor because I cant scroll to the reply box, but whatever ... i'm the one locked in a bank."

Then a little more humor:

- "4 of us being held. It's one womans birthday and she is offering me a granola bar. she is too cute. one man has low blood sugar. can we GO?!"

- "people are staring in the window. can they see me? can they get us coffee?"

Except that an hour later, Dooling still needed to explain her actions. "Can I defend myself for a moment?" she tweeted. "Not only did the Manager already call the cops, but I could only use Twitter because of Blackberry issue."

Back at work, Dooling was ready to move on.

"There have been some very negative responses, but I think it's mostly from Twitter-overload," she wrote in the e-mail.

On the plus side: she gained more than 200 Twitter followers in a few hours, finishing the morning over 2,100.

"And my personal blog got 200 extra views than usual," she wrote.