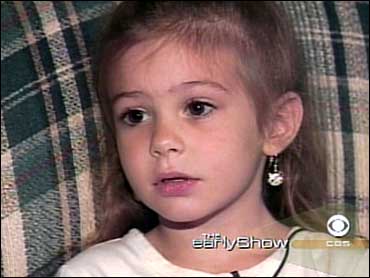 If you ask 5-year-old Talyor Duckworth, she'll tell it to you straight. Her mom doesn't listen to common sense: "I said why don't you lay down?"

Her mother, Charlie Gill, four months pregnant, suddenly doubled over with stomach pains. To Taylor, the couch seemed as good a remedy as any, but not to her mom.

"She wouldn't lay down on the couch." Taylor tells CBS News Correspondent Lee Cowan, "She fell down!"

Apparently to Taylor, that was her first, "I told you so moment." But then, she did what any adult would do, she calmly dialed 911, and was just as frank with the dispatcher.

Taylor: Um, can you get to - can you come to my house? Because my mom has something a matter with her tummy.

Dispatcher: Something's wrong with her tummy?

For the next several minutes, Taylor played medic: Answering the dispatcher's questions, almost as if kindergarten had been more like medical school.

Dispatcher: Does she take any kind of medication that you know of? Any pills?

Taylor: She has, but since when her baby was in there, it's been trying to get out because it's a boy.

Taylor: Her baby is a boy, so it's been trying to get out.

Dispatcher: Oh, she's going to have a little baby?

Dispatcher: It's very close to her having it?

Taylor: We're having a brother.

Taylor tells Cowan, "She looked like it was going to come out."

Doctors treated Taylor's mom for a spike in blood pressure, but said she and the baby were fine.

As for Taylor, she already knows her soon-to-be younger brother owes her a big favor.