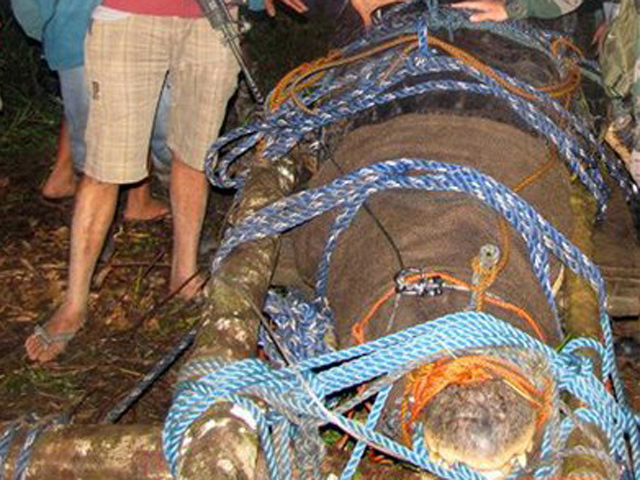 MANILA, Philippines -- After capturing a one-ton crocodile that could be one of the biggest caught alive in the world, officials said Tuesday that they were hunting for an even bigger beast that may be lurking in the creeks of a remote southern Philippine region.

Villagers and veteran hunters ensnared a 20-foot saltwater crocodile over the weekend after a three-week hunt along a creek in Bunawan township in remote Agusan del Sur province, where terrified villagers have reported at least one deadly attack by the huge reptiles.

The crocodile -- weighing 2,370 pounds -- was the biggest to be caught alive in the Philippines in recent years. Wildlife officials were trying to confirm whether it was the largest such catch in the world, said Theresa Mundita Lim of the government's Protected Areas and Wildlife Bureau.

The Guinness World Records lists a saltwater crocodile caught in Australia as the largest crocodile in captivity, measuring 17 feet 11.75 inches. Saltwater crocodiles can live for more than 100 years and grow to 23 feet.

Relieved villagers in Bunawan threw a fiesta to celebrate the late-Saturday capture of the crocodile, which had to be pulled by rope by about 100 people from the creek to a clearing, where a crane lifted it onto a truck. Its snout was tied shut with nylon cables and a net.

"It was like a feast, so many villagers turned up," Bunawan Mayor Edwin Cox Elorde said.

Wildlife official Ron Sumilier, who has hunted "nuisance crocodiles" for 20 years and led the team behind the capture in Bunawan, said a search was under way for a possibly larger crocodile he and villagers have seen roaming in the farming town's marshy outskirts.

"There is a bigger one and it could be the one creating problems," Sumilier told The Associated Press by telephone from Bunawan, about 515 miles southeast of the Philippines' capital, Manila.

"The villagers were saying 10 percent of their fear was gone because of the first capture," Sumilier said. "But there is still the other 90 percent to take care of."

Backed by five village hunters he has trained, Sumilier has laid 20 steel-cable traps with animal carcass as bait along the creek where the first crocodile was caught and in a nearby vast marshland.

Sumilier said he found no human remains when he induced the captured crocodile to vomit.

He said he was also summoned by Bunawan officials two years ago after a huge crocodile attacked and ate a child from a capsized boat in the marshland. The killer crocodile was not found at the time.

Elorde said he plans to make the captured crocodile "the biggest star" in a future ecotourism park that will be built to increase awareness of villagers and potential tourists on the vital role the dreaded reptiles play in the ecosystem.

Philippine laws strictly prohibit civilians from killing the endangered crocodiles, with violators facing up to 12 years in prison and a fine of 1 million pesos ($24,000).

The world's most endangered freshwater variety, crocodylus mindorensis, is found only in the Philippines, where just about 250 are known to be in the wild.

About 1,000 of the larger saltwater type, or crocodylus porosus, like the one captured in Bunawan, are scattered mostly in the country's southern swamplands, wildlife official Glen Rebong.

Terrell Brown had the story on "The Early Show." To see his report, click on the video at the top of this story.