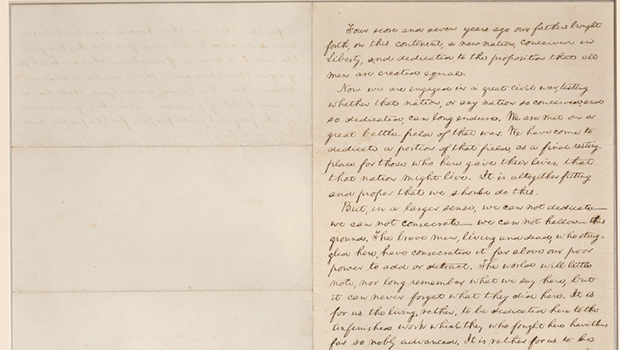 On November 19, 1863, President Abraham Lincoln stood at the Soldier's National Cemetery in Gettysburg, Penn., and delivered one of the most influential speeches in U.S. history.

"Four score and seven years ago," he began the famously short speech.

Lincoln had two personal secretaries who handled much of his correspondence. But in this case, he personally penned five copies, two early drafts and three more in the months after the delivery.

"That he personally took care of it shows people that his marks were brief but he really did recognize the sacrifice that was made at Gettysburg and wanted to honor it," Michelle Hamill, a conservation expert for Cornell University Library, told CBSNews.com.

The two early drafts are housed at the Library of Congress. Another is at Cornell. Lincoln penned this copy on two parts of a folded sheet of paper. Unfolded, there is text on both sides. The university is celebrating the 150th anniversary by offering the public the rare opportunity to view both sides. Previously, only the front of the original was displayed, alongside a copy of the back.

Hundreds have already visited since it went on display Nov. 12.

"His handwriting and the seriousness of the message he wrote and the fact that he took such care in writing out these copies really resonates with young people," said Hamill.

"We need to take what steps we need to in order to preserve it because it really is a wonderful piece of history."

Those steps include understanding the ink and paper used by Lincoln.

The "very fine quality" paper he used came from pulverized clothing rags that were pressed in a paper-making machine. The rags were at least partially made of linen, a fabric known for durability, which has helped it last so long. A historian in Washington, D.C. was even able to track the exact store that sourced the paper.

Once they understood the paper, there was the question of the ink. Lincoln used iron gall ink, the most commonly used during the time period.

The "gall" comes from gallnuts, which are produced by oak trees as they fend off insect parasite attacks. The gallnuts are boiled down, giving the ink its color. Sulfuric acid is also added.

Visitors to Cornell will see a small brown halo surrounding the "heavier letters" like "t" and "h" because, said Hamill, those letters are starting to rust. It's the acid migrating out the paper.

They may also notice that the front side of the document is an entire shade darker. This has nothing to do with light damage or ink. The discoloration resulted after an art dealer placed cellophane over the copy in the 1930s. It's an indication of how quickly these aging documents can show damage if not properly preserved.

While understanding the ink and paper are important, it would all be for naught if they failed to protect the document from environmental hazards like oxidation, humidity and light damage.

"If we can reduce these, we can absolutely extend the longevity of these national treasures that we want people to enjoy," she said.

"By understanding Lincoln's paper, the ink, the cellophane and realizing what we need to do, that's where all the science comes in. It is really this incredible blend of art and science... All of those play a part in the next 150 years."

The original will remain on display through Saturday, Nov. 23.