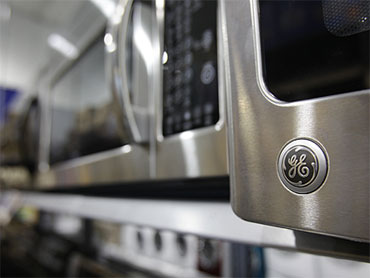 The report from one of the nation's largest companies illustrates the damage from a severe recession that has only recently begun to lift, leaving consumers and businesses devastated by high rates of defaults in everything from credit cards to mortgages.

GE's overall revenue fell 20 percent to $37.8 billion, coming up short of what Wall Street was looking for. It's a sign that the conglomerate still faces a long road to recovery.

GE has struggled to overcome GE Capital's troubles, which include big losses from real estate. The financial unit'sprofit dropped 87 percent during the quarter.

GE is relying on its industrial side - whose divisions build dishwashers, sonogram machines, locomotives and wind turbines - to help it rebuild profits following the recession, which began in late 2007 and has burdened the U.S. economy with huge job losses, a tight credit market and sharply lower home values across much of the nation.

Meanwhile, GE is trying to shrink the size of GE Capital, which once made up nearly half its profits. It also wants to reduce the financial unit's reliance on risky forms of funding and has propped up GE Capital with infusions of cash.

But investors are still nervous about looming problems at some of GE Capital's larger businesses, like its big holdings and loans in office buildings, shopping centers and other commercial properties.

Many analysts believe that market is heading for a major crisis. The commercial real estate unit lost $538 million during the third quarter, the only GE Capital division that failed to post a profit.

GE is also reportedly trying to shed NBC Universal through a deal to sell the entertainment division to cable company Comcast Corp. NBC has suffered from a decline in advertising, but the unit posted a bigger profit last quarter.

The past year has been a painful one for GE, as it slashed its dividend for the first time since the Great Depression to save cash and lost its coveted top credit rating.