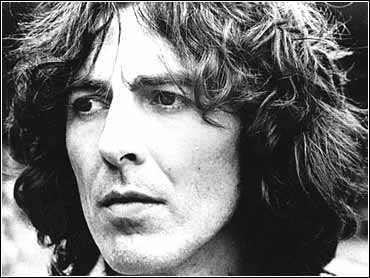 Fans and friends throughout the world mourned the death of George Harrison, the Beatles' quiet lead guitarist and spiritual explorer who added both rock 'n' roll flash and a touch of the mystic to the band's timeless magic.

"He left this world as he lived in it, conscious of God, fearless of death, and at peace," Harrison's family said in a statement.

"He died with one thought in mind - love one another," De Becker said.

In New York, hundreds of fans stopped at Strawberry Fields, the section of Central Park dedicated to the memory of Harrison's bandmate John Lennon.

Interactive: The Beatles.
Some left flowers or notes, others lighted candles and some just sat on a park bench and cried.

"When my wife told me the news this morning I burst into tears," said Adam Perle, 52, who played Beatles songs on his guitar near an impromptu shrine that grew as word spread of Harrison's death. "I was 11 when I first heard them, and they changed my life."

In Liverpool, England, where Harrison was born, the flag at town hall was lowered to half-staff tribute.

Gerry Scott, Liverpool's mayor, said Harrison was "a warm, peace-loving man who was more than just a talented musician."

"This is a black day, a sad day. He was a very talented lad and he was too young to die," said Gerry Marsden, leader of the Liverpool band Gerry and the Pacemakers, part of the 1960s rock explosion in the city.

"George was always the quiet Beatle," Marsden said. "He was always acting as peacemaker between John and Paul."

At Harrison's mansion near London, fans left bunches of roses and lilies. One note read: "The world will never be the same."

"I am devastated and very, very sad," McCartney told The Press Association, a British news agency, early Friday. "He was a lovely guy and a very brave man and had a wonderful sense of humor. He is really just my baby brother."

In Washington, the White House said President Bush was "very saddened" to hear of the former Beatle's death. Spokesman Ari Fleischer said the president "considers the Beatles to be one of the greatest groups of any time in music."

Harrison was born Feb. 25, 1943, making him the youngest Beatle and the only one whose childhood was not marred by divorce or death. He showed his rebellious nature early, defying his school's dress code by wearing jeans and growing his hair long. In 1956, when the hip, folk-inspired "skiffle" craze hit, Harrison and his brother formed a band, but their young age forced them to sneak out of the house to play.

Harrison and Paul McCartney rode the same bus to school, and soon found they had music and guitars in common. In 1956, McCartney introduced the 14-year-old Harrison to The Quarrymen.

Not old enough to join, Harrison hung around, idolizing John Lennon and emulating everything he could. Harrison stood in the back of the room at al their shows with his guitar. A few times he filled in for the regular guitarist. Gradually, Harrison became a member of the band.

During a Beatles' gig in Hamburg, Harrison received a deportation notice because he was only 17. A curfew existed for anyone under 18. The police were informed and George was homeward bound.

He has said the Beatles never really set out to become the greatest rock band in history.

Yet the man who introduced the other Beatles to Eastern mysticism and brought the sitar into rock and roll always managed to make a musical statement, either with his own compositions or with his guitar work. He was the distinctive lead guitarist on the band's classic tunes and added his vocals to John's and Paul's.

Critics say many of his own songs ranked among the best pop tunes ever. "Taxman," "Something," "Here Comes The Sun" and "While My Guitar Gently Weeps" were some of his best-known contributions to the Beatles legacy.

Even Frank Sinatra had called "Something" the best love song of the past fifty years.

When the Beatles broke up in 1970, Harrison began a solo career, producing what many consider his masterpiece, "All Things Must Pass."

Harrison organized the 1971 benefit Concert for Bangladesh at Madison Square Garden with such friends as Bob Dylan and Eric Clapton to raise money to help millions of starving people in a part of the world Harrison had come to love.

Clapton was also in love with Boyd and eventually she split from Harrison to be with his friend.

Related Stories:
Sir Paul 'Devastated'
Songs For The Ages
Harrison produced seven gold albums and became a movie producer in the late '70s. His autobiography, "I, Me, Mine," was published in 1980. Olivia Arrias became his second wife in 1978 and their son Dhani is Harrison's only child.

In the late 1980s he formed the Traveling Wilburys with Jeff Lynne, Roy Orbison, Tom Petty and Bob Dylan. In 1997, Harrison was diagnosed with throat cancer and treated successfully. In Dec. 1999, Harrison and his wife were woken when a man wielding a knife stabbed Harrison in the chest at his home.

Harrison fought cancer for years and only a few weeks ago was in New York City for treatment at a hospital known for its oncology program.

With Harrison when he died were his wife and son Dhani, 23.

It wasn't immediately known if there would be a public funeral for Harrison. A private ceremony had already taken place, De Becker said Thursday night.

Friends say he spent his last days preparing himself spiritually for his own death, reflecting on something he learned all those years ago: all things must pass.