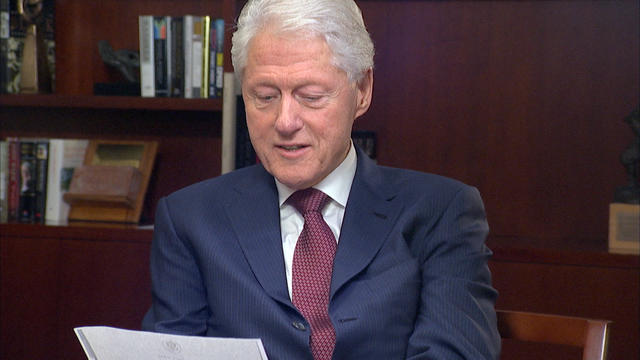 Former President George H.W. Bush, who died late Friday, was known for his civility in politics and in his relationships. Mr. Bush wrote a letter to incoming President Bill Clinton, who had just defeated him in the 1992 election, in an expression of cordiality to one's political opponents and encouragement to a new president.

Mr. Clinton read Mr. Bush's letter to him on "60 Minutes Overtime," as he reflected about their friendship.

"When I walked into this office just now I felt the same sense of wonder and respect that I felt four years ago. I know you will feel that, too," the letter began. "I wish you great happiness here. I never felt the loneliness some Presidents have described."

Mr. Bush said that being president would be "very tough times," and urged him not to get discouraged by criticism.

"You will be our President when you read this note. I wish you well. I wish your family well," the letter concluded. "Your success now is our country's success. I am rooting hard for you."

In an opinion post in the Washington Post, Mr. Clinton said "No words of mine or others can better reveal the heart of who he was than those he wrote himself."

"Given what politics looks like in America and around the world today, it's easy to sigh and say George H.W. Bush belonged to an era that is gone and never coming back — where our opponents are not our enemies, where we are open to different ideas and changing our minds, where facts matter and where our devotion to our children's future leads to honest compromise and shared progress. I know what he would say: 'Nonsense. It's your duty to get that America back,'" Mr. Clinton wrote.

They may have campaigned as bitter opponents during the 1992 presidential election, but years later, Mr. Bush and Mr. Clinton formed a strong friendship. Their bond developed in an unlikely place: on an Air Force One flight to tsunami-ravaged Indonesia in late 2004.

Since the plane was equipped with only one bed, President Bush suggested the two split their time in it. President Clinton declined the offer, reasoning that after years of sleep deprivation, he could rest on the floor. The conversation broke the ice between the two former presidents.

"We were like two people circling each other, wanting to reach out and shake hands," Mr. Clinton said, "and somehow, the darn bed was the handshake."

The pair continued working together, later raising money for New Orleans after Hurricane Katrina struck. They even gave a joint commencement address at Tulane University.

Mr. Clinton said he has relished the bond he shared with Mr. Bush. "It's been one of the great joys of my life, my friendship with him."