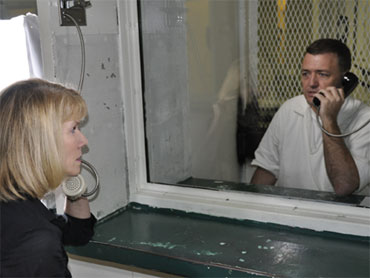 (CBS) - Some time on the evening of April 7, 2006, Matt Baker snuffed out the life of his 31-year-old wife, Kari. Kari had become a liability. Baker, a Baptist preacher in Waco, Texas, was having an affair with a young woman in his congregation and simply couldn't risk getting a divorce.

So the man, who publicly preached righteousness on Sundays, privately committed the ultimate sin in the home he shared with his wife and two daughters. He drugged his wife, and then while she was unconscious, suffocated her with a pillow. How does a "man of God" commit an act of such cruelty and selfishness? Earlier this month, those who struggle to understand Baker's actions got some insight into this killer during an unusual trial that took place in Kerrville, Texas.

On the surface, the trial, held in family court, had little to do with the details of Kari's death or Matt Baker's conviction for murder. A panel of twelve, mostly male jurors, were there to decide custody of the couple's two daughters, what would be in "their best interests." The two girls, Kensi and Grace, 15 and nearly 11 , had been living with Matt's mother and father in Kerrville, the town where Matt was raised. Kari's parents, Jim and Linda Dulin, were fighting for custody, arguing that Matt and his parents had "brainwashed" the girls into thinking their father was innocent. The girls, not only believed their mother had committed suicide, as was originally believed, but that Kari's parents had convinced authorities to falsely accuse and convict Matt of murder. The Dulins accused the Bakers of "parental alienation," ruining the warm relationship the Dulins once had with their granddaughters. But what came out of testimony at the custody trial proved to be very unsettling: Matt Baker grew up in a dysfunctional home where emotional and sexual abuse may have occurred.

Until Matt was nearly 10 years of age, his parents, Barbara and Oscar ran a foster home in Kerrville. So for much of his early childhood, he grew up around almost 50 foster children. On July 7 and 8, some of those children, now grown women in their forties, returned to Kerrville for the custody hearing and accused their former house parents of abuse. One of the saddest stories came from Betsy Maloney. Betsy, a mentally handicapped woman, said that Barbara Baker mocked her by calling her "Porky Pig" and "Fatso" and encouraged the other children in the home to make fun of her as well. She also claimed that Oscar Baker "touched me in wrong places."   Another former foster child, Laurie Miller Hardin, also remembered Betsy as the butt of jokes in the house. And she too accused Oscar of inappropriate behavior, tracing a finger down the lower portion of her buttocks and down a leg. Connie Mirfakhraie told the court that Oscar french-kissed her when she was 12. "I recall being very scared and the smell and the taste being very alien and disgusting," she said on the stand.

The most serious accusation came from Millie Van Steenburg who accused Oscar Baker of sexually abusing her beginning when she was 7-years-old.

Both Barbara and Oscar denied under oath all of the allegations of abuse, and, in fact, no criminal charges of abuse have ever been filed against either one of them. The Bakers had been investigated at one point after Betsy , while still a child in the home, complained to counselors about her treatment, but both were cleared, they said, of any wrongdoing. And the Bakers also produced another former foster child, a male, who told the court that he saw no abuse while he was in the home. Still, none of the women who accused the Bakers of abuse seemed to waver under cross-examination and their stories were often similar in details.

When Matt was around 10, the Bakers stopped running their foster home. The reasons are shrouded in mystery. The Bakers say simply that they stopped because their own biological children, Matt and Stacie, were unhappy and no longer wanted other children in the house. That doesn't match what Matt Baker told me himself in an interview back in 2007. He said those days were some of the happiest of his life.

The testimony in the court raises some interesting questions for which there may be no answers: Did Matt Baker observe abuse when he was growing up in his parent's foster home? If he did see his father take liberties with young children who couldn't defend themselves, did that warp his sense of right and wrong? Did he grow up believing that you can privately break the rules and get away with it?

We now know that at various times while Matt Baker worked as a youth minister and chaplain, he was accused of inappropriate behavior with young woman. Was that learned behavior? Did he see that at home when he was growing up?

As part of the custody hearing, 15-year-old Kensi Baker testified that she wanted to stay with the Bakers, but at the end of the nearly two-week-long trial, ten of the 12 jurors, the necessary majority, voted to transfer custody of her and her little sister to their maternal grandparents. The girls were also ordered to have no contact with their father who is in prison serving a 65-year sentence. Perhaps the jurors wanted to ensure that if bad, hurtful behavior was learned at the Baker home, it would not be passed on to a third generation.