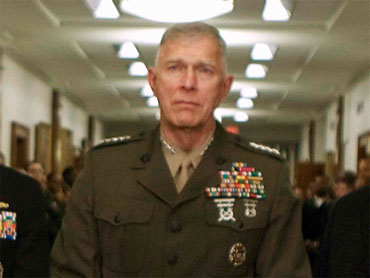 The Marine Corps commandant said Wednesday that the ability of U.S. troops to fight and win wars must trump other concerns as the nation considers whether to let gays to serve openly in the military.

In testimony before a House committee, Gen. James Conway said he supports a Pentagon assessment to determine how to lift the ban. But he also suggested that civil rights ultimately would have to take a back seat if it meant tampering with the military's ability to protect the country.

"That's what they have been built to do under the current construct and I would argue that we've done a pretty good job bringing that to pass," he told the House Armed Services Committee.

"My concern would be that somehow that central purpose or focus were to become secondary to the discussion," he said.

Conway is seen as the most resistant among the service chiefs to efforts under way in Congress and the Pentagon to repeal the 1993 "don't ask, don't tell" law. But his testimony indicates that he won't stand in the way as Defense Secretary Robert Gates undertakes a comprehensive study on how to lift the ban without hurting the force.

President Barack Obama has pledged to change the policy, saying it unfairly punishes patriots who want to serve their country. Congress would have to agree, and it's unclear whether Democrats would have enough votes to pass the legislation.

The opinion of the service chiefs, and Conway's in particular, is expected to factor heavily into the debate.

It's Conway's job to ensure that young recruits are prepared to deploy to dangerous and remote regions of the world. Because Marines frequently represent the military's first line of attack and are dropped behind enemy lines, unit cohesion and morale are considered vital to their ability to succeed.

In 1993, opponents of President Bill Clinton's proposal to lift the ban on gays argued successfully that it might hurt military effectiveness. Facing resistance in Congress, Clinton settled for "don't ask, don't tell," which allowed gays to serve so long as they kept their sexual orientation a secret.

Conway's concerns have been echoed by other service chiefs.

Chief of Naval Operations Adm. Gary Roughead told House lawmakers on Wednesday that he, too, wants the study to be complete before any changes are made.

"That needs to be done because only with that information can we discuss the force that we have, (and) not someone else's," Roughead said.

Britain, Canada, Australia and Israel allow gays to serve openly. Other nations already allow women to serve on submarines; the Navy lifted its ban this month.

Both Conway and Roughead said they would oppose an immediate freeze on firings under "don't ask, don't tell" until Congress can consider broader legislation repealing the 1993 law.

Democratic Sen. Carl Levin of Michigan, chairman of the Senate Armed Services Committee, has proposed a freeze as a way of allowing gay troops to fight without worrying that they could lose their job.

"Half measures, I think, would only be confusing in the end," Conway said.

Christopher Preble, head of foreign studies at the Cato Institute think tank, said that the service chiefs recognize that change is inevitable, but that the military shouldn't wait too long to determine its next move.

"The military as an institution should not find itself so out of step with the public at large that it cannot relate to the society it's defending," he said.