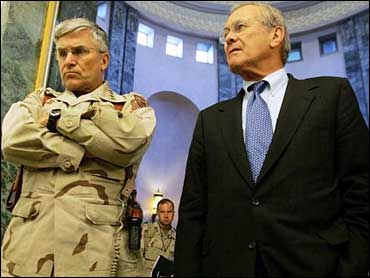 The top American commander in Iraq said Wednesday there could be a "fairly substantial" pullout of American troops by next spring if there's continued political progress in Iraq and if the rebellion can be held in check.

Iraq's transitional prime minister, Ibrahim al-Jaafari, meanwhile, called for a speedy withdrawal of American forces. He said at a news conference with U.S. Defense Secretary Donald Rumsfeld that the time has come for a coordinated transition from American to Iraqi military control across the country.

Rumsfeld, however, when asked how soon a U.S. withdrawal should happen, said no exact timetable had been set.

Al-Jaafari laid out two conditions that must be met before U.S. troops could begi to withdraw. First, there must be a quickening of the pace of U.S. training of Iraqi security forces, and second there must be closely coordinated planning between the U.S.-led military coalition and the emerging Iraq government on a security transition.

"We do not want to be surprised by a withdrawal that is not in connection with our Iraqi timing," al-Jaafari said.

Forecasts by both al-Jaafari and Casey, however, were conditional on curbing the insurgency, which U.S. military officials have said is showing no signs of abating.