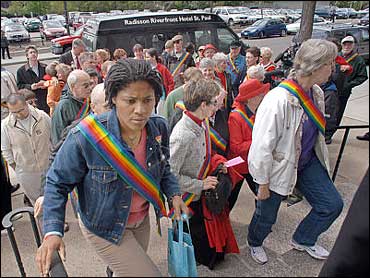 A Roman Catholic priest denied communion to more than 100 parishioners Sunday, saying they could not receive the sacrament because they wore rainbow-colored sashes to church to show support for gay Catholics.

Before offering communion, the Rev. Michael Sklucazek told the congregation at the Cathedral of St. Paul that anyone wearing a sash could come forward for a blessing but would not receive wine and bread.

A group called the Rainbow Sash Alliance has encouraged supporters to wear the multicolored fabric bands since 2001 on each Pentecost Sunday, the day Catholics believe the Holy Spirit came to give power to Christians soon after Jesus ascended to heaven. But Sunday's service was the first time they had been denied communion at the altar.

Archbishop Harry Flynn told the group earlier this month that they would not receive communion because the sashes had become a protest against church teaching.

Sister Gabriel Herbers said she wore a sash to show sympathy for the gay and lesbian community. Their sexual orientation "is a gift from God just as much as my gift of being a female is," she said.

Ann McComas-Bussa did not wear a sash, but she and her husband and three children all wore rainbow-colored ribbons and were denied communion. "As a Catholic, I just need to stand in solidarity with those that are being oppressed," she said.

While other parishioners sat or kneeled after going to the altar, sash-wearers remained standing with their hands cupped as a symbol they still wanted the sacrament. Their silent protest lasted about five minutes, until other parishioners rose to hear the announcements and the benediction before being dismissed.

The Rainbow Sash Alliance says that by wearing the sash, members "publicly claim our place at Christ's table, sacramentally expressing the truth in our lives, and calling the church to embrace a new day of integrity and freedom."

Organizer Brian McNeill wrote to Flynn last month, explaining that the sashes are a symbol "to celebrate the gift of our lesbian, gay, bisexual, and transgender sexuality."

Flynn wrote back to say the sashes are "more and more perceived as a protest against church teaching," declaring that it has never been acceptable "to use the reception of communion as an act of protest."

Parishioner Larry Pavlicek was not sympathetic. As a divorced man, he said he has to live with the church's teaching that he cannot remarry and cannot have sex outside of marriage.

"If you're going to be a Catholic, either live with it or call yourself something different," he said. "They're trying to change something that has been taught by the church for 2,000 years."

Archdiocese spokesman Dennis McGrath said Flynn made the decision to deny communion after a cardinal asked U.S. bishops to adopt a consistent policy on the sashes. Catholics in Chicago and other cities such as Melbourne, Australia, have also worn sashes. Some have been denied communion, others have not.