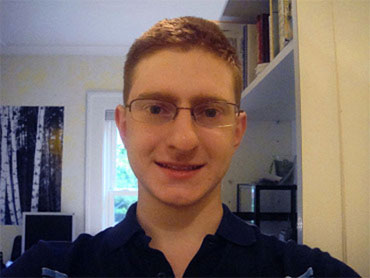 It was a sad day at Rutgers University in New Jersey. Students mourned a classmate who killed himself after a secret video of his sexual encounter with a man was posted online.

Two classmates are under arrest. As upsetting as this case is, it's not uncommon. In the past month, at least four gay teens have been driven to take their own lives, CBS News Correspondent Byron Pitts reports.

(Scroll down to watch Byron Pitts' report from Rutgers)

On a rain-soaked Thursday, the mood at Rutgers was as grim as the campus skyline.

"It is a sad situation," one student said. "I'm sad that it happened."

By all accounts, Tyler Clementi, an 18-year-old freshman, was a gifted violinist, a good-natured soul who didn't have many close college friends and who mostly kept to himself.

On Sept. 22, authorities say Clementi committed suicide by jumping into the Hudson River from the George Washington Bridge after his roommate secretly streamed video of him on the Internet kissing another man, all for the world to see.

"I've been an educator for 36 years working with students, and this the first time I've ever seen anything quite like this particular situation," Rutgers Vice President Greg Blimling said.

Clementi's roommate, freshman Dharun Ravi, and another student, Molly Wei, have been arrested and charged with invasion of privacy. Both are now out on bail.

It all started when Ravi tweeted: "Roommate asked for the room till midnight. I went into molly's room and turned on my webcam. I saw him making out with a dude. Yay."

A message that appears to be from Clementi was sent out on a gay community message board two dater later.

"He … saw me making out with a guy," the message reads. "The school (probably) won't do much of anything."

Clementi reportedly told his residential adviser about the incident. The university refuses to say what if anything was done with that information.

In his final posting, Clementi wrote on Facebook, "Jumping off the gw bridge sorry."

On Thursday night, prosecutors said they will investigate whether this was a bias crime.

"I was very sad by the story," Joe Kosciw, senior director of research for the New York-based Gay, Lesbian and Straight Education Network. "It's another loss of a young life."

In Texas, 13-year-old Asher Brown shot himself in the head after he was reportedly bullied. In Minnesota, 13-year-old Seth Walsh hung himself from a tree in his backyard. In Indiana, 15-year-old Billy Lucas killed himself. All reportedly over relentless teasing about their sexuality, and all just in the last month.

According to a recent survey by Kosciw's group on gay bullying, nine out of 10 gay, lesbian and bisexual students are bullied in school, and they are four times more likely than heterosexuals to attempt suicide.

Students at Manhattan's Harvey Milk High School know those statistics all too well. This is one of the first high schools in the country opened primarily for gay, lesbian and transgender students.

"I think people get scared and fearful and not because they were born into that fear but because it was taught by society," one student said.

Back in classrooms at Rutgers, it's a day of reflection and bitter irony. Just this week the university launched a campus wide campaign on civility.