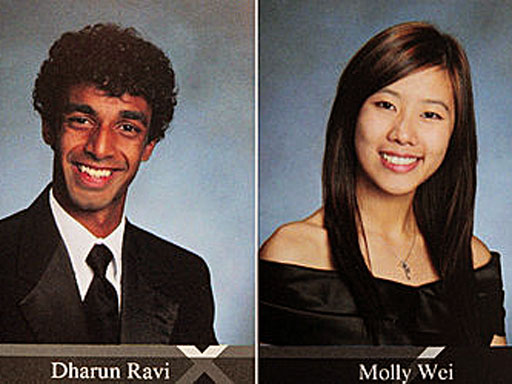 Clementi's family attorney, Paul Mainardi, said that after learning of the violation of his privacy Clementi jumped off the George Washington Bridge, which connects New Jersey with upper Manhattan. Clementi's car, cell phone and computer were found near the bridge and his wallet was found on a walkway on the bridge.

There was reportedly no note at the scene, but ABC News reported that Clementi left a final goodbye on his Facebook page that read "jumping off the gw bridge, sorry."

Investigators have not confirmed the suicide because no body has been found, but sources within the investigation told the Star-Ledger that witnesses say they saw him jump.

Ravi and Wei were charged with illegally taping Clementi having sex and posting the images on the Internet, after they turned themselves in to the campus police.

According to investigators, the first incident happened Sept. 19 when Ravi set up a web cam in the room to capture Clementi and his partner after Clementi asked to have the room alone for a few hours.

"Roommate asked for the room till midnight. I went into molly's room and turned on my webcam. I saw him making out with a dude. Yay," Ravi said on his Twitter page in a Sept. 19 entry posted at 6:17 p.m., according to the New Jersey Star-Ledger.

Ravi allegedly broadcast that encounter but investigators would not say what video site it was posted to.

A few days later Ravi allegedly tweeted to his 150 followers telling them to "chat" him on iChat, an instant messaging sight with live video feed, the Star-Ledger reported.

The next day Clementi's belongings were found on the bridge.

"...We are sickened that anyone in our society, such as the students allegedly responsible for making the surreptitious video, might consider destroying others' lives as a sport," Goldstein said.

The accused were classmates at West Windsor-Plainsboro High School North in Plainsboro, N.J.

If convicted of the third degree offense of transmitting or distributing the images they could face up to five years in prison each under state law. A fourth degree conviction for collecting the images could mean up to 18 months in jail, according to the Middlesex County Prosecutor's Office.

County Prosecutor Bruce Kaplan had no immediate comment about additional charges in the wake of Clementi's death.