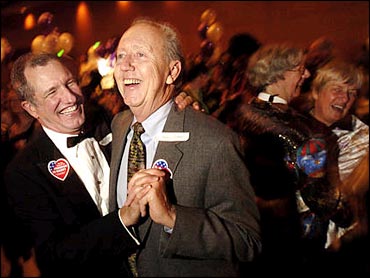 Crowds gathered Sunday to honor San Francisco's newly married same-sex couples as politicians continued to debate whether the mayor overstepped his authority in allowing the unions.

About 2,000 people attended a mass wedding reception for the couples at the Hyatt Regency Hotel's Grand Ballroom, which was decorated with purple and white balloons. Well-dressed couples wearing heart-shaped red, white and blue stickers that said "Freedom to Marry" arrived before the event.

The marriage of Del Martin, 83, and Phyllis Lyon, 79 - longtime leaders in the city's lesbian community who have been together 51 years - was the focal point of the celebration. They were the first of more than 3,000 gay couples married in San Francisco beginning Feb. 12.

Two judges last week denied requests by conservative groups to immediately halt same-sex marriages in the city and find the licenses already issued to be invalid.

Schwarzenegger has directed state Attorney General Bill Lockyer to take action and stop the marriages, which were authorized by Mayor Gavin Newsom.

San Francisco sued the state after it started allowing same-sex weddings. It claims the gay marriage ban violates the equal protection clause of the California Constitution.

Lockyer, a Democrat who may run against Schwarzenegger in 2006, said Sunday that he will defend state law against San Francisco's lawsuit, but bristled at the idea that Schwarzenegger can tell him what to do.

The governor can direct some parts of state government, such as the California Highway Patrol, "but he can't direct an independently elected attorney general," Lockyer said in an interview with The Associated Press.

Lockyer said he does not expect San Francisco's challenge of the state's gay-marriage ban to succeed.

"I have a healthy regard for their theories even though it is not the law. We are obligated to defend the law, not some wished-for change in policy," Lockyer said.

CBS News Legal Analyst Andrew Cohen notes that while legal and political battles over gay marriage are in progress in several states, the issue is unlikely to be resolved anytime soon.

"Whether or not the California courts ultimately sanction the marriages now being recognized in San Francisco, it's clear there is now a legal divide in America over whether and to what extent same-sex couples are entitled to the right to be married," says Cohen. "Over the next few years, we'll probably see dozens of judicial opinions on the topic, opinions that surely will offer partisans on both sides of the fight plenty of ammunition. Ultimately, the Supreme Court will be asked, and will be forced, to offer a broad opinion on what the federal Constitution says about equal protection and gay marriages."

At the huge wedding reception Sunday, some of the couples said the same-sex marriages were strengthening their families.

"This is a great thing for us," said Laura Bauer, who married her partner of eight years last Monday and attended the reception with their 5-year-old daughter. "With everyone talking about family, now we can give our daughter a family and no one should take that away from us."

Carly Foster, 29, of Agoura Hills, married Caprice Fowler in San Francisco on Feb. 15, but she was among the estimated 2,000 people who attended the expo because the couple plan to renew their vows.

"I hope the state will back our marriage," Foster said. "If they don't, it will send a message that we don't mean anything."