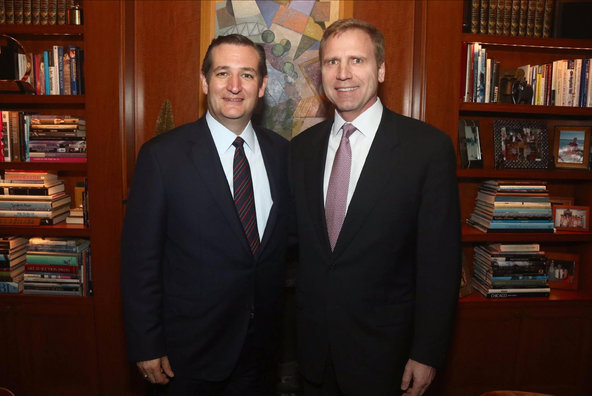 Two gay hotel owners sparked a firestorm this week when news broke of a dinner they hosted with Republican presidential candidate Ted Cruz -- and now, their businesses might suffer for it.

The conservative Cruz, who has a record of staunch opposition to same-sex marriage, spoke Monday at the Central Park apartment owned by Ian Reisner and Mati Weiderpass, two leading figures in the gay hospitality industry. Shortly after the New York Times reported the story, a Facebook group organized to "Boycott Fire Island Pines Establishments & Out NYC Hotel." Reisner and Weiderpass created The Out hotel, which primarily services a gay clientele, while the Fire Island beach resort was recently acquired by Reisner and another business partner.

"Fire Island is our safe space. Our comfort zone. A weekend getaway where we could let our guard down. A place of no discrimination. And to suddenly think that the owners (who are gay) of a portion of the commercial space support anti-LGBT politicians is beyond comprehension," the boycott page founder, who first put up the Facebook event, told CBS News in a statement. "The LGBT community won't stand for it."

"The thought of 'gay' money spent at their establishments making its way into the campaign accounts of anti-LGBT elected officials is outrageous," the Facebook page owner, who wished to remain anonymous, added. "This movement is not even 24 hours old and the response has been enormous. We will be meeting with a number of gay rights organizations in the next few days to see how we want to collectively organize and respond."

The New York Times later reported that while the event focused on foreign policy -- particularly on the defense of Israel, an issue the hosts and Cruz agreed on -- the controversial topic of same-sex marriage was mentioned.

The Times cited two guests who recalled the senator saying that he would not love his daughters any differently if they were gay. The Cruz campaign maintains that the 2016 candidate did not soften his tone regarding same-sex marriage and that the Texas senator had indeed voiced his opposition to it.

Reisner and Weiderpass have both commented on the news, defending their decision to engage with the tea party legislator.

"I was given the opportunity to have a candid conversation with Senator Ted Cruz on where he stood on all issues, foreign and domestic," Reisner said. "Senator Ted Cruz and I disagree strongly on the issue of gay marriage, but having an open dialogue with those who have differing political opinions is a part of what this country was founded on. My tireless support of the gay community and its causes worldwide hasn't changed and will not change."

Weiderpass added: "People on both sides of the aisle need to be able to communicate with one another even when they ideologically disagree."

Another revelation about the venue was more troubling to the Cruz campaign. In October, a 23-year-old New York man died of a drug overdose at the duplex where Cruz spoke. Cruz aide Rick Tyler, who was not at the Manhattan dinner, told CBS News that "in retrospect, knowing what we know now, we might have chosen a different venue."

The Facebook boycott page had over 4,000 "likes" by early Friday afternoon.