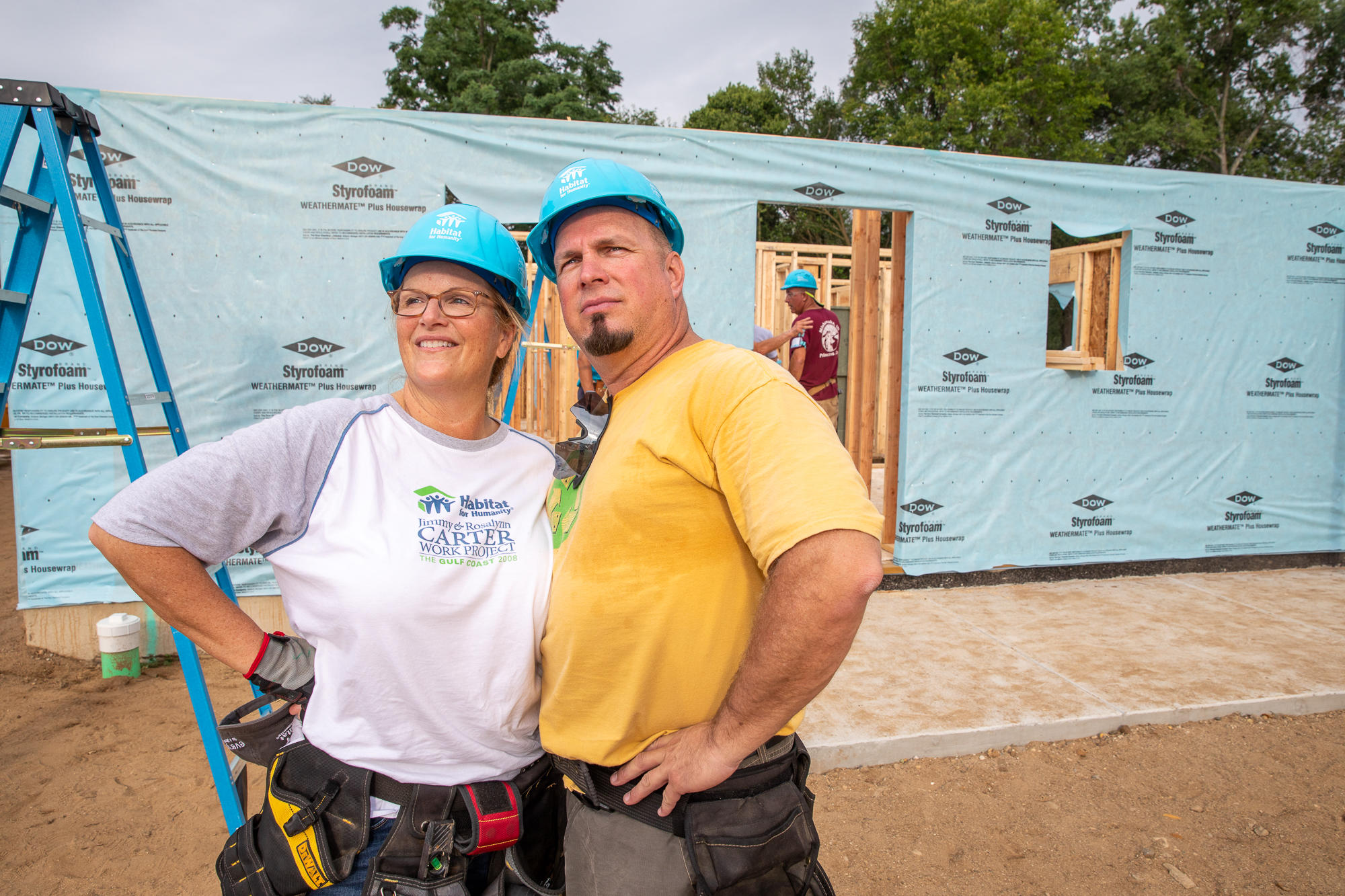 Though the couple are country music royalty, their work with Habitat for Humanity is far more than just a photo opportunity. Brooks and Yearwood roll up their sleeves just like everyone else each time they volunteer with the organization to build homes for those in need. The singers partnered with the organization in 2007, and they first helped build homes in 2008 after Hurricane Katrina.

"New Orleans was our first build that we actually swung a hammer and got hooked," said Yearwood.

Brooks said the two of them have done "anything and everything you can possibly imagine, from the roof to the basement and everything in between." There's only one task that's off limits: "They won't let me wire a house, because they're smart," he joked.

Yearwood said of their most recent build in Mishawaka, "We've installed windows. We went from a slab to walls. We've been doing interior framing. We were laying the block for the kitchen cabinets that are going in using a saw — they let me use power tools. Roofing, shingling the house — everything you can possibly imagine."

Brooks said that Yearwood is the master builder in the family.

"She keeps going, 'I'm a Virgo,'" he said. "If you know Virgos, they don't leave anything that isn't exactly balanced, exactly right, exactly symmetric. I'm like a bull in a china shop. I just want to swing a hammer. She's the one who actually cares to make sure everything is perfect for the person that's coming in."

Brooks claimed that no one on the work sites is impressed by their celebrity status.

He joked, "When you travel with the Carters, nobody is starstruck with you."

Brooks couldn't help but take the opportunity to gush about his wife again; each of them tried to stay humble, taking turns bragging about each other instead.

"That's my favorite thing," he said. "To watch Miss Yearwood among these building sites, because she doesn't back off from anything and the fact that she's a girl only makes her all the more determined to show all the boys she's a better worker. You get to learn a lot about your spouse when you work side by side on one of these."

Yearwood refused to take all of the credit, though.

"By the end of the first day, these guys are yelling for Garth because they want him to help, because he is really great," she said. "He's a whatever-it-takes guy. They want him on their team because he's a great builder. It's pretty cool to see. I'm proud."

It's well known in the country music world that Brooks and Yearwood rarely spend time apart. The two, who have been married for 13 years, explained that they have always prioritized their marriage.

"We've both put in the time to say, 'Hey, look, we control our lives. We're thankful and blessed, people and God are taking care of us; at the same time, we are in control of our own schedule, so we work diligently to make sure we have all our time together, especially nights. … It's very sexy and attractive for your spouse to have her own cooking show and win Grammys, but at home, she's the love of my life."

Yearwood agreed, saying, "It's your priority in life. It's what you do. We want to be together, and we try very hard to schedule our lives around that."

They said they take their cues from another power couple: President Carter and his wife.

Read more about what President Carter had to say about his Habitat for Humanity build.