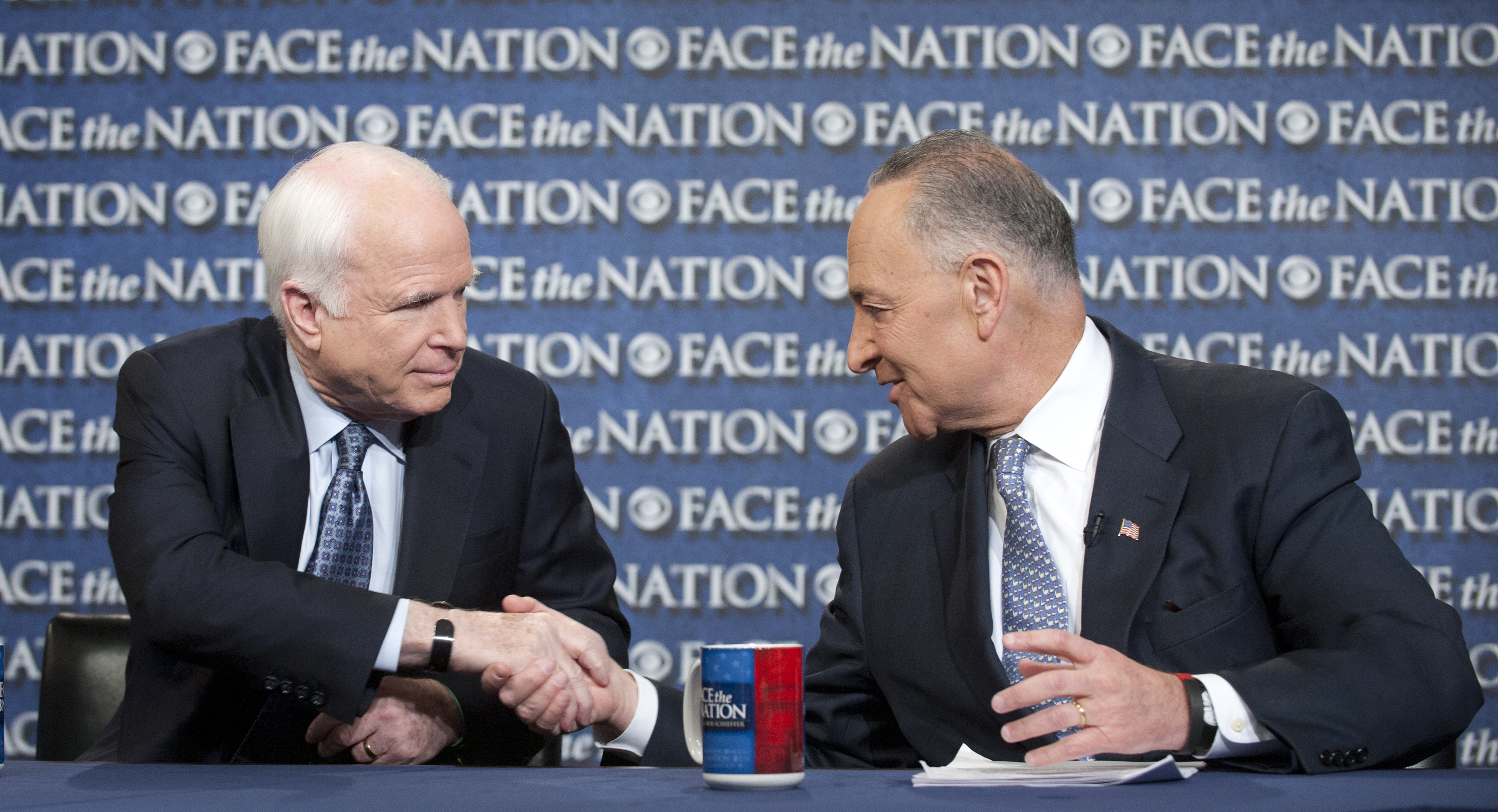 (CBS News) The "gang of eight" senators working on a comprehensive immigration reform bill that includes a pathway to citizenship could present the legislation by the end of this week, Sen. Chuck Schumer, D-N.Y., said Sunday on "Face the Nation."

Joined by his friend and fellow "gang" member Sen. John McCain, R-Ariz., Schumer said the staffs of the four Republican and four Democratic senators "are in a room working 12 hours a day, taking all the agreements that we've come to over the last three months, and turning them into legislative language, specific legislative language."

"All of us have said that there will be no agreement until the eight of us agree to a big, specific bill, but hopefully we can get that done by the end of the week," Schumer said. "There have been kerfuffles along the way, but each one of those thus far has been settled."

Sen. Marco Rubio, R-Fla., the son of Cuban immigrants and a member of the group, last week called reports of an agreement "premature," and cautioned against "rushing" immigration legislation. Though he said Rubio has been "very helpful and important" in the process of crafting a bill, McCain indirectly panned his colleague's hesitation.

"I reject this notion that something is being railroaded through - this is the beginning of the process, not the end of it," McCain said. "The Judiciary Committee will act. There will be amendments. There will be debate. Then it will go to the floor of the Senate. There will be plenty of time for discussion and debate."

Rubio has been the leading voice among Republicans calling for tighter border security as a prerequisite to any legalization option for the 11 million undocumented immigrants currently living in the United States. Lest history repeat itself, McCain - who last week witnessed a woman scale an 18-foot fence between Mexico and Arizona - agreed a concrete plan for border control is a necessary tenet of the immigration package.

"Most Americans agree that if you pay back-taxes, if you pay a fine, if you learn English, if you go to the back of the line, then you can and should be eligible for a path to citizenship," McCain said.

But, he added, "back in 1986, when our beloved Ronald Reagan, we gave amnesty to 3 million people and we promised that we would secure the border. We now have 11 [million illegal immigrants]. I've got to assure the people of this country and Arizona that we're not going to have a third wave 10 or 15 or 20 years from now."

If a bill does come out of the "gang" this week, a "long road" remains on its way to passage, Schumer said, citing "people on both sides who are against this bill, and they will be able to shoot at it in had the committee." The best-case scenario would be a floor vote in May, following committee markup.

McCain predicted "a great deal of unhappiness about this proposal, because everybody didn't get what they wanted," but gave a nod to the departments of business and labor for "fairly good-faith negotiations" on a guest-worker program, to keep employers from hiring undocumented workers.

"There are lots of little issues on different parts of the bill that we have to resolve," Schumer conceded. "There are always disagreements on each one, but the desire of all eight to meet in the middle and come to an agreement, which is so much more important than each little thing that we might prefer one way or the other, has carried us through this far. And I am very hopeful and optimistic it will carry us through the whole way."