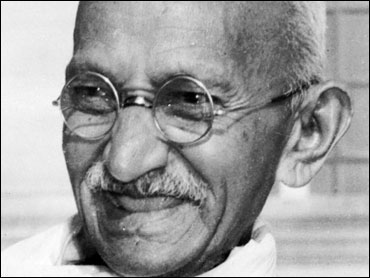 Mohandas Gandhi's eyeglasses and other items have been sold at auction for $1.8 million to an Indian freight company that says it wants to donate the possessions to the Indian government.

Confusion surrounds Thursday's sale, which had raised an outcry in India. Furious bidding had already been going on when the owner announced outside Antiquorum auction house that he was withdrawing the items.

The auctioneer has agreed to wait two weeks before finalizing the sale.

The winning bidder was UB Group. The seller, James Otis, said he was trying to raise money to promote pacifism.

The lot included Gandhi's round eyeglasses, worn leather sandals, a pocket watch, and a brass bowl and plate.

Earlier, India's government has rejected a proposal by the owner of Mohandas Gandhi's eyeglasses and other personal items to halt their upcoming sale in exchange for commitments to fight poverty and promote nonviolence.

The auction house said Gandhi is believed to have given the eyeglasses and their leather case to an army colonel who had asked him for inspiration, telling him they were the "eyes" that had given him the vision to free India.

The timepiece is a 1910 Zenith sterling silver pocket watch with an alarm that Gandhi gave to his grandniece, Abha Gandhi.

Gandhi also gave the bowl and plate to his grandniece, who worked as his assistant for six years. Gandhi, who advocated nonviolent civil disobedience to resist British rule in India, died in her arms in 1948 after being shot by a Hindu radical.

The sandals were apparently given to a British military officer who photographed the leader in the Yemen port city of Aden, where Gandhi had stopped en route to England.

"Nothing makes me happier than allowing these items to be in India, to support nonviolence and Gandhi's great works," Otis said.

In 2007, a letter written by Gandhi was withdrawn from a London auction to allow the Indian government to acquire it.

In an auction last week in Paris, the Chinese government complained about the sale of two bronze fountainheads looted from a summer palace outside Beijing in 1860, saying it wanted them back. A Chinese art collector made the winning bid, but admitted Monday that the bid was bogus and said he wouldn't pay the $36 million.